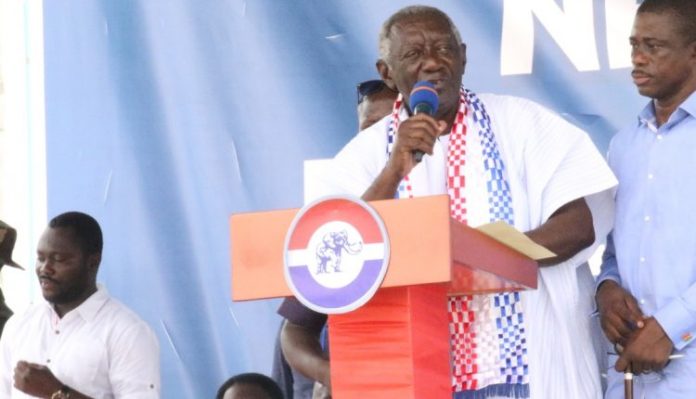 Ex-President John Agyekum Kufuor says the ruling New Patriotic Party(NPP) continues to be the political party that ensures great transformation of Ghana whenever it’s in power.

According to him, the NPP keeps giving the leadership that will do the work for Ghana.

The former Head of State noted that the President Akufo Addo-Bawumia leadership does not just talk but actually delivers much to the admiration of all objective Ghanaians, the reason why Ghanaians must give the NPP another term in office.

He further stated that a check at the figures at the Statistical Service will show the tremendous unparalleled achievement chalked by the Akufo Addo government in its first time which is a pleasant surprise for many.

“It is not given to old men to see their children, grandchildren rise and prosper the way this party is already displaying and I pray that the good Lord will bless our current leadership to lead us into victory and the leadership must be sustained, victory after victory so that we give Ghana the transformation that we all pray for,” Ex-President Kufour said at the National Executive Council meeting in Accra on Saturday to officially acclaim President Akufo Addo as the NPP Flagbearer for the 2020 election.

He prayed that President Akufo Addo and his Vice, Dr. Mahamudu Bawumia will continue in power for the future of the party to be sustained for Ghana inclusively and not just the NPP.

“The rule of law, wealth creation and humanity will all come together and the promise is clear for everybody who wants to see to see.”

Year of return indication that Ghana is loved – Kufuor