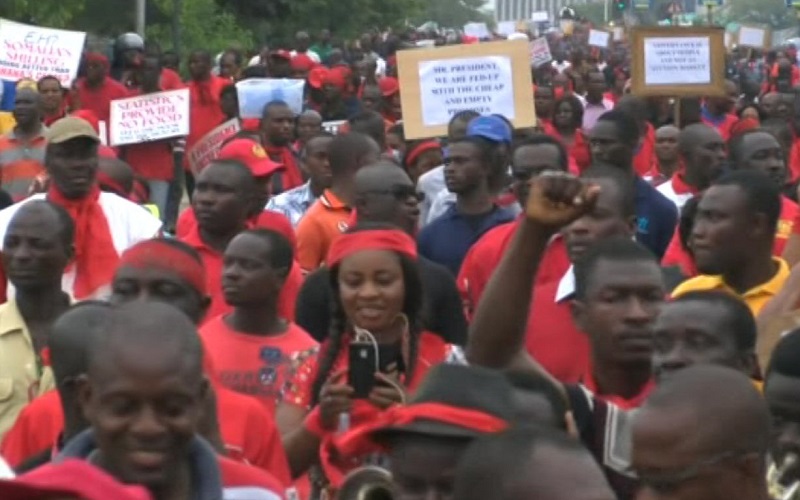 Aggrieved customers of the defunct DKM and depositors of the microfinance and savings and loans companies which closed down under the Akufo-Addo government have expressed disappointment in the government for not fulfilling its side of the bargain to refund their locked up funds in full.

Prior to the 2020 State of the Nation Address, a letter signed by Executive Secretary to the President, Nana Asante Bediatuo announced that Nana Akufo-Addo through Executive Instrument has approved the release of 15.6 billion Cedis for full payment to affected customers of 347 Micro Finance Institutions, MFIs, 23 Savings and Loans Companies and other Fund Management firms.

The frustrated depositors say they are now living in abject poverty because they still cannot access all their monies.

“We are being forced to virtually beg to survive,” one angry affected customer lamented.

“Nana Akufo-Addo lied to us. It was a campaign promise to refund our monies to us but till now, zilch. I mean not even a pesewa and four years is up,” Catherine Mensah, a mother of three told a section of the media.

“We’re dying. Nana Akufo-Addo is it our fault to deposit monies in institutions accredited by the Central Bank? What has Ghana come to. Our lives also matter. The government claims they are cleaning the banking sector to make us smile, but here we’re suffering. Do they want to force us or our children into prostitution,” a former customer of DKM, Andrews Simon, said in a radio call-in programme.

An ex-soldier, who wants to remain anonymous, said he had all his life savings at one of the Savings and Loans companies which was closed down and contended “I regret serving this nation.”

“Is this my end? I served in the army for 20 years. I decided to save all my earnings to stay afloat but today look at me. Is this our end. Is Ghana worth dying for? We were promised our monies will be given back to us through the appointment of a Receiver but up to date, I’ve been going back and forth. I’ve given up,” he said.

“Nana Addo should know that he promised us and has failed us. We’ll also show him come December 7, 2020. You can’t lie your way to power. Our monies must be given back to us. They can’t use it to campaign. Never!

“My son had everything with Gold Coast and today it’s all gone. Young man today he’s not himself. He’s depressed. We keep visiting the hospital weekly and the drugs alone are swallowing us financially. Do you want me to bury my son instead of the other way round? Our thumps will speak come December,” a father of three at Ashaiman also added his voice to the media campaign to get locked up funds disbursed to customers.

It will be recalled that on February 11, 2020, the Vice President, Dr Mahamudu Bawumia, assured depositors whose funds have been locked up in regulated but defunct financial institutions of full restitution of their funds.

Speaking at the Great Hall of the Kwame Nkrumah University of Science and Technology as part of a two-day Government Townhall Meeting and Results Fair in Kumasi, the Ashanti Regional capital, Vice President Bawumia said Government empathises with depositors, who have endured anguish and hardships through no fault of theirs.

In 2019 the Bank of Ghana, in a series of moves to clean up the supposed weak and messy financial sector, revoked the licences of a number of banks, microfinance and savings and loans companies, leading to an unfortunate loss of jobs and in some cases, the locking up of depositors’ funds.

To assuage their pain, government has pledged to restore 100% of their locked up funds, once they have been verified.
In a further move to address residual pain from previous collapses, Government will secure the funds and pay up the victims of DKM, who lost part of their investments after the Bank of Ghana suspended the operations of the DKM in 2015, Vice President Bawumia added.