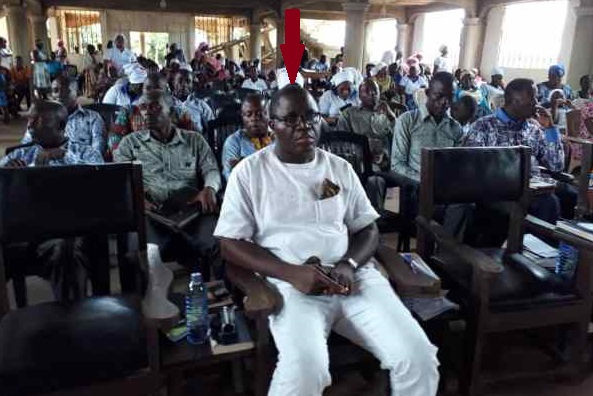 The fate of the New Patriotic Party (NPP) parliamentary candidate for Mpohor constituency, John Kobina Abbam Sanie, to have his voter’s ID card withdrawn or approved, will be determined today as the District Registration Review Committee meets to consider the merits or otherwise of the challenge process initiated against his residential status in the constituency.

Sanie has had the issuance of his voter’s card put on hold at least for now as his residential status is being challenged by one Alexander Ofori, a second-year student of Takoradi Technical University who is the polling agent for the National Democratic Congress (NDC).

Mr. Sanie, this web portal understands, had gone to the Mpohor D/A JHS in the Atwerboanda Electoral Area on Tuesday, July 14, 2020, to register but the NDC agent, Alexander Ofori detailed at the polling station to monitor the exercise questioned his residential status in the constituency and in the process, initiated a challenge procedure against him.

He was accompanied by his wife and children.

However, all of them were considered strangers since according to the NDC, they are not residents in any of the electoral areas under the constituency.

On Monday, July 13, 2020, the election management body withdrew the voter’s ID card of the NDC parliamentary candidate for Cape Coast North constituency, Kwamena Mintah Nyarku for allegedly providing false with regards to his residential status when he went to the registration centre in Nkafoa to register in the ongoing voter’s registration exercise.

Per the dictates of the Electoral Offences and their Sanctions (2.5), “The eligibility of a person applying to be registered as a voter could be challenged by an accredited person as per the Electoral Laws, or a person qualified to register or even the registration officer involved”.

With Sanie’s residential status now in doubt at least for now, the Mpohor District Elections Officer, Mercy Hammond’s attention was drawn to it, compelling election management body to withhold the issuance of his ID card, until the District Registration Review Committee hears the matter.

Available information suggest that Mr. Sanie is a permanent resident in Bortianor in the Ngleshie-Amanfrom-Bortianor constituency in the Greater Accra Region but occasionally visits some of his family members in the Mpohor constituency.
He is said to be a registered voter in Bortianor.

However, after conceiving the idea of contesting the Mpohor NPP parliamentary primaries, he then managed to get his name in the voter’s register in Bortianor transferred to Mpohor where he was able to vote in the 2020 District Assemblies Elections.

The code of his previous voter’s ID, 6059025483, bears it all as it is totally different from the code of those registered in Mpohor constituency.

Sanie is alleged to have said that he voted in the Mpohor constituency during the 2016 general elections, a claim the NDC has disputed.

According to the NDC, Sanie’s name is not in the previous voter’s album of any of the Electoral Areas in the Mpohor constituency.

Point 2.1 of the Electoral Offences and their Sanctions (Application for Registration) in part reads, “A non-eligible voter on the grounds of age, nationality or residence commits an offence if he or she attempts to register or succeeds in registering as a voter. In such a scenario, if detected, the affected person’s name will be deleted from the register. Additionally, in the case of a non-national, it attracts a form of prosecution if found guilty by a competent court of jurisdiction. Ideally, barring any event of transfer of vote, the centre where one registers is where one is supposed to vote”.

In the view of the NDC, since the old voter’s register, a document Sanie could have relied on to make a case, is no longer going to be used for the conduct of the 2020 general elections, but the compilation of a new one, they have the right to question his residential status once he does not reside in the constituency.

The NDC is further questioning Sanie’s true identity as the name on his previous voters ID card is John Sanie but the name he used to register in the ongoing voters registration exercise is John Abua Abam Sanie.

For purposes of taking evidence and calling witnesses, the Committee enjoys the same powers as are enjoyed by Community Tribunals and once a conclusion has been reached on a case, the Electoral Commission is to implement that decision within 1 day after the Commission and the applicant have been informed.

However, should the applicant decide to appeal against the decision of the Committee, the Commission is obliged by law to wait for the final determination of the case by the Chief Registration Review Committee Officer who is normally a High Court Judge in the District.