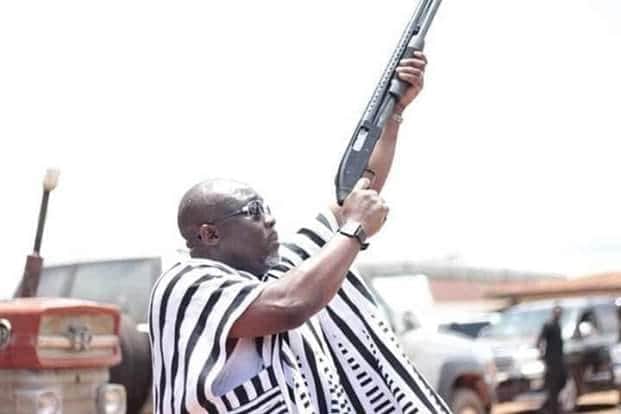 The Awutu Senya West Member of Parliament in a statement stated that the picture of him with a gun was taken two years ago during the enstoolment of his boss Ursula Owusu-Ekuful as a Development Queen at Akyem Asuom in the Eastern Region.

“I, therefore, urge all discerning Ghanaians to take note and treat with utmost contempt such malicious actions, intended to create mistrust and provoke unnecessary tension, especially in these months leading to the general elections.”

Below is a video posted by EIB Journalist Kojo Ansah on Facebook on September 29, 2018, with the caption: “George Andah – supporting his Boss Ursula Owusu -Ekuful who is being enstooled as Enkosuohemaa at Akyem Asuom #Gunshot“.

FAKE NEWS ALERT: Misuse of an image of Nenyi George Andah (MP), playing role of a Musketeer at a Traditional Ceremony.

My attention has been drawn to a series of calculated, false and misleading publications circulating an image of me holding a gun, suggesting that I was irresponsibly brandishing a weapon in public, and adding that the image was taken at a one of the registration centers of the ongoing voters registration program.

The allegations from NDC TV on Facebook and rebroadcasted across other portals suggested, I, Nenyi George Andah has said, “WE WILL SHOOT AND KILL, WE ARE DETERMINED TO KILL EVERY NDC SUPPORTER WE SEE.”

5.I also confirm that one such person who posted the image, Felix Ofosu Kwakye, has apologised for spreading the falsehood after his attention was drawn to the facts, and he promised to take it down from his social media page.

NCA can’t process your request for renewal of authorization – Min to Gold, XYZ