The lifeless bodies of the two police officers who went missing after their canoe capsized on the Oda River in the Ashanti Region have been retrieved.

“The bodies of the two police officers have been retrieved from the Oda River,” the Service said on Facebook Friday, adding: “Investigations are ongoing.” 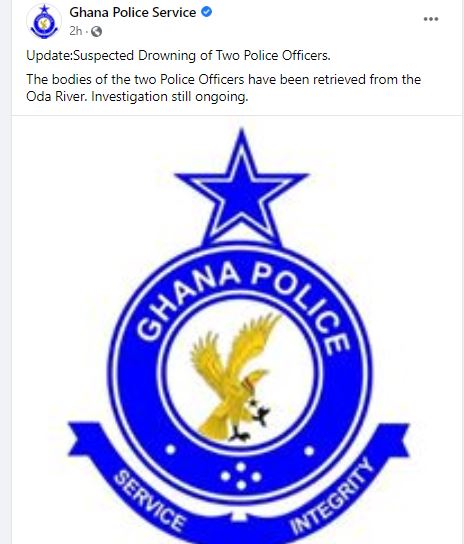 Two mobile patrol officers of the Obuasi Divisional Command, L/Cpl. Amadeus Akwesi Boateng and L/Cpl Stephen Kyeremeh went missing on Wednesday when a canoe they were travelling in on River Oda to cross to a village for operations capsized.

The Divisional Commander, DSP Martin Asenso in an interview with host Bonohene Baffuor Awuah on Anopa Kasapa on Kasapa FM said two of the officers onboard the same canoe swam to safety when the incident occurred, but the others are yet to be rescued.

“Yesterday, we started a search of the missing officers, when we had a report from the two who were rescued, but we were unsuccessful.

“Efforts are ongoing to trace the missing officers. We’ll still embark on a frantic search of the ones missing today.” DSP Asenso said.