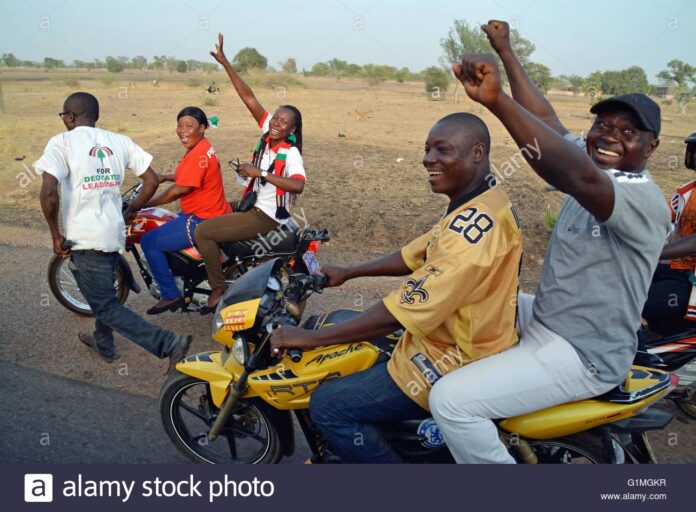 IS THE MOTOR BIKE STRATEGY OF THE NDC A GOOD IDEA??

I just returned from a field trip in Ashanti Region tracking the ongoing Registration process, the other week we were in Volta Region looking into the alleged military deployments and I must admit a number of the Constituencies are still largely inaccessible.

I have heard an ongoing conversation by some members of the NDC suggesting that their Party Resort to the procurement of motorbikes for this election instead of the usual pick ups distributed to the Constituencies.

Folks let’s do a little analysis…

Assuming the Party uses the GHC45,000 to procure a few bikes, it’s left GHC100,000 which can be given to the Party in two installments, GHC50,000 to work and GHC50,000 as Election Day resources to sort out polling agents.

So the opportunity cost of procuring a pick up for each constituency would be 5-10 motorbikes which a number of Constituency Executives can have access to and millions of Cedis in cash resources.

If I have the chance to advice the NDC I would say look, you are NOT as resourceful as those in Government and there is NO point spending $25,000 to buy pick ups if you can’t get money for polling agents on Election Day.
Buy motorbikes and distribute to the constituencies.
The Constituencies that already have some pick ups, give them a stipend to refurbish them for use.
We are just four months away.

If I have the chance to talk the NDC Constituency Executives i would say look, the mother of all resources is NOT a pick up, the mother of all resources is CASH!
Instead of requesting for a pick up, take the money and use it to ran your Constituency Campaign.
Take the money and have enough to feed your polling agents and even pay them on Election Day, so that whatever money your Party brings on Election Day would be a bonus.

But above all I would say, shelve yourselves of the cost burden of fueling a pick up which only few people can ride in.
Just GHC10 fuel in a motorbike and you can move the whole day.
5 Motorbikes mean 5 different people can move to different locations at a time.

If the NDC really wants to run a people’s campaign then Motorbikes and Money are the Big-Deal!!

Don’t waste GHC145,000 on Pick Ups which only one person would cease control, buy plenty motorbikes and give the rest of the Money to the Constituency Executives to ran the Campaign period!!

To Whom It May Concern…