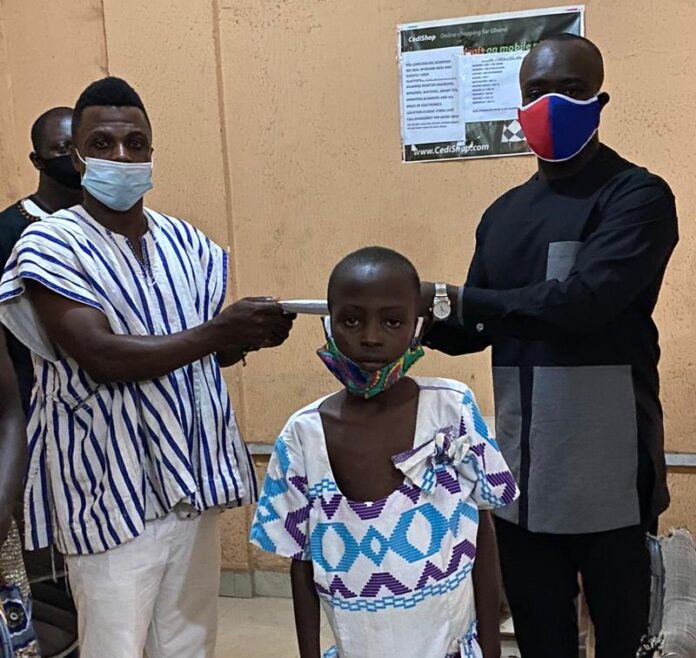 The Strategic Patriots, a political action group of the New Patriotic Party(NPP), has responded to an SOS call by the family of young Prosera Buenaa, who sustained 3rd-degree burns whilst cooking for her family on a farm near Munamunaso in the Tain District of the newly created Bono Region.

The 10-year-old girl has been severely deformed due to the fire accident.

According to doctors at the Holy Family Hospital in Techiman where she was referred to for treatment, she will require skin graft surgery and therapies to repair some of the injuries she sustained.

The Strategic Patriots, upon hearing of the plight of the young girl, quickly came together and organised fundraising to support her to undergo the skin graft surgery which according to her physicians will cost about GHC10,000.00.

According to the little girl’s father, Mr. Sebastian, a peasant farmer, his daughter went to the farm with her siblings and aunt to harvest corn. At some point Prosera offered to cook some food for her family.

Unfortunately, the fire got out of control, and in her attempt to douse it, her clothes caught fire and burnt her severely.

Her cries for help attracted the attention of her family, but before they could put the fire out, the little girl had already been burnt to the 3rd degree.

Upon an emergency evaluation by Doctors at the Nsawkaw Government Hospital, she was transferred to the Holy Family Hospital at Techiman, for further medical attention.

The specialists at the Techiman Hospital recommended a skin graft surgery to repair the damage caused by the fire to the little girl.

The parents, who could not raise money for her medical expenses, therefore, appealed for help, and their call was answered by the Strategic Patriots of the NPP.

A Deputy Communications Director of the NPP, Yaw Preko, who presented the donation on behalf of the Strategic Patriots, said the group is not only interested in shaping the civil political future of the nation through advocacy, but also the physical and emotional well-being of the electorate.

“As a political fraternity, the Strategic Patriots of the NPP, will continue to pursue and support the socio-political development of this nation, and our help in tragedies like what happened to this little girl, will continue to feature prominently in our future projects”, Mr Preko remarked.

The Strategic Patriots, which is made up of a cross-section of Ghanaian professionals across the world, has been helping some vulnerable and poor people in the country on the quiet in the areas of education, economic empowerment and medical emergencies.

Mr Preko, was hopeful that the donation will bring some relief to the 10year old girl and also reduce the huge financial burden on the family.

The father of the girl, Sebastian Durenaa, was full of praise to the Strategic Patriots for the gesture, adding that, without their help, and help from many philanthropists, his daughter may have wasted away.