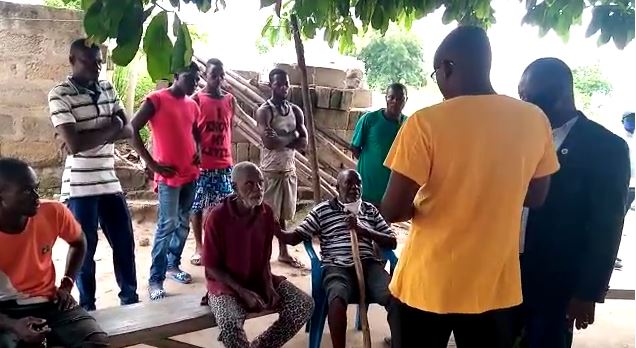 The Agotime-Ziope district command of the Ghana Police Service in the Volta region has begun an investigation into the matter involving some 15 persons arrested on Sunday at Kpetoe on suspicion of being Togolese attempting to participate in the ongoing nationwide voter’s registration exercise.

At about 9:30am Monday morning, all 15 suspects reported to the Kpetoe police station in the company of the MP for the area, Charles Agbeve.

After confirmation of their presence, the police led them to their homes at Ziope and Hornugo to confirm their residential status and perhaps their nationality.

At Mama Norkuawo’s residence in Ziope, the family head confirmed that two of the suspects; Yawa Aforkpatsa and Lumorahie Aforkpatsa are members of the family and the household.

The team moved on to Hornugo, where the residential status of all the remaining suspects were confirmed.

But one of the victims, a visually impaired, retired staff of the Ghana Armed Forces, Christian Humphrey Agbeviade and one other relative expressed discontent over the incident while stating that he has been put under unnecessary pressure to prove his citizenship in his own country.