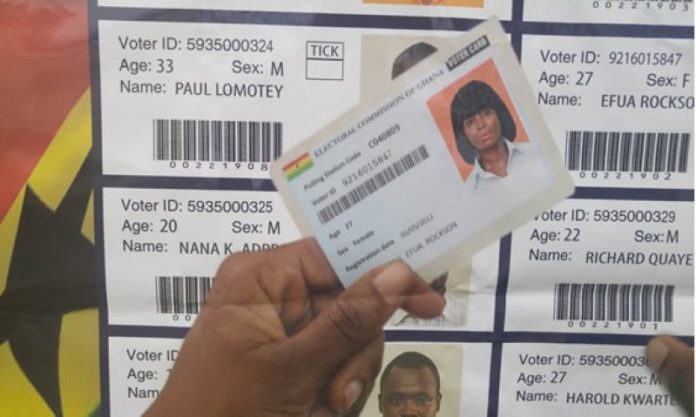 The Voters Registration exercise in Asuogyaman Constituency of the Eastern Region has been marred by pockets of altercations between the opposition National Democratic Congress and the ruling New Patriotic Party.

Some men reportedly associated with the ruling NPP are reportedly marauding and violently preventing applicants they suspect to be non-residents from registering.

There was near pandemonium at the Adinakope polling station at South Senchi when the men physically stopped a woman from registering claiming she is from Ningo.

The commotion drew both the MP, Thomas Ampem Nyarko and the aspiring Parliamentary Candidate for the NPP, Paul Asare Ansah to the scene.

There was an exchange of abusive words after Paul Ansah insulted the MP and his followers hurled insult on the MP.

It took the tedious effort of the police and military to restore calm as the altercation nearly escalated into violence.

Paul Ansah accused the MP and the NDC of attempts to register non-residents smuggled from surrounding constituencies particularly Juapong in North Tongu.

He again alleged that the MP has bribed some of the NPP agents to lose guard for the illegality.

However, Thomas Ampem Nyarko, described as baseless the allegations rather accused the NPP of violently preventing legitimate applicants from registering instead of using the Challenge forms as the NDC is doing to challenge persons minors and persons smuggled to the Constituency by the NPP.

Meanwhile, a group of young men who arrived in a pickup vehicle with registration number WR 2589-17 to register in Senchi South Electoral Area on Friday were resisted by the residents since they are not known, according to the Assembly Member for the area, Issah Larweh.

Prior to the registration exercise, the Constituency Secretary of the NDC Bright Sikanku issued a statement that the party has “noted with deep concern some surreptitious moves by the NPP in Asuogyaman to taint the upcoming mass registration exercise with irregularities.

Sufficient evidence available to the NDC points to the fact that the desperate parliamentary candidate for the NPP in Asuogyaman Constituency having realised that defeat is staring at him in the face, has resorted to meeting potential voters from neighbouring constituencies and enticing minors to register in the upcoming mass registration warning to resist.

Meanwhile the youth wing of Asuogyaman Constituency of the NPP, had also issued stern warning that they will violently resist attempt by the opposition National Democratic Congress ,NDC, to smuggle Togolese and some residents of Volta region to to the Constituency to register in Voters’ registeration.

The party also warned Pastors and Landlords that “We are also issuing strong warnings to landlords and Pastors conniving with NDC to accommodate these people .We are issuing this word of caution to Landlords and Pastor to return monies taken from NDC because when we go round to see any non- resident of Asuogyaman in your house or church we can’t guarantee your safety ,you the pastor and your Church building .Landlords too same.Parents too are warned not to let their children under 8 years to be deceived to register”.