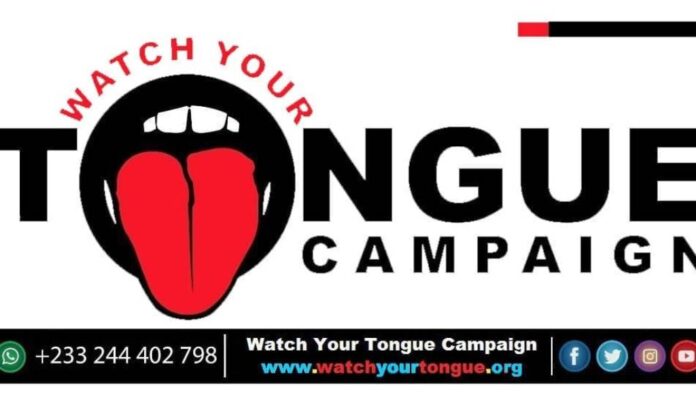 The launch steered by the General Secretary of Watch Your Tongue Mr. Benjamin Oduro Arhin Jnr (aka Bnoskka) appealed to the media to partner with peace campaigners in his opening statement to commence the press conference.

”He expressed worry about how media reportage in the country was becoming provocative and unfortunately attracting more audience against reports that promoted peace and development.

Mr Monney was launching the “Watch Your Tongue”-(WYT), peace campaign towards the upcoming 2020 General Election.

The press conference outlined their calendar of activities which includes a visit to parliament to address Help Maintain Ghana Peace, Traffic duties to create awareness for peace, and on-ground and virtual roadshows in regions, and then a conference which will bring all political parties representatives to speak on how to help maintain Ghana peace.

He said it was unfortunate that many hearts were troubled ahead of the December polls because the citizenry had relegated peace to the background with regular reports of violence at registration centres and charged the media to change the narrative.

Mr Monney said the media had a charge to keep the peace by reporting in a way that would not ignite violence, as well as not endangering the peace and stability of the country.
They should not repeat words of violence by politicians, he added.

Sergeant Daniel Kwasi Ofori Appiah, Founder, and Leader of the WYT Campaign Team called on the citizenry to think right, speak right, act right and write right before, during, and after the elections to contribute to the peace in Ghana.

He asked politicians to avoid heated arguments in the media that would incite supporters.
Mr Bessa Simons, Acting President of the Musicians’ Union of Ghana advised musicians not to use provocative words that would spark violence when engaged by politicians for campaign songs.

He said the songs must rather encourage voters to “choose for themselves their leaders.”
Volunteers took turns to address the citizenry in various local languages, including, Dagbani, Ewe, and Akan on the need to maintain peace, before, during, and after the polls.

In attendance were WYT volunteers, traditional and religious leaders.