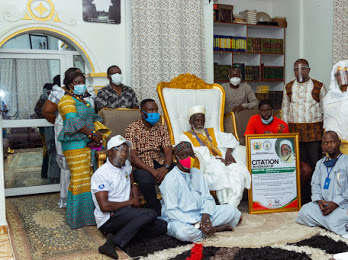 According to the Chief Imam, Assembly Members are the fulcrum of decentralization therefore the importance of their roles cannot be underestimated.

The National Chief Imam said this when Interim Executives of Ghana Association of Elected Assembly Members (GAAM) paid a Courtesy call on him at his office to introduce the Association to him and seek his blessings .A citation was presented to the Chief Imam by the Association.

He said the Association is not political but with objective of fostering better relationship with all major stakeholders in decentralization to improve effectiveness of local governance.

Speaking to the media, Charles Adu Asinor said the association welcomes any decision and policy intervention that will motivate and facilitate the work of Assembly members.

The Association will climaxe the introductory visit at the Presidency where they will interact with President Akufo Addo.