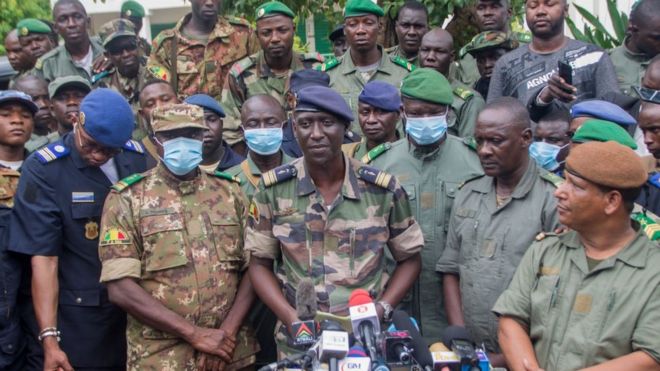 Coup leaders in Mali say a transitional president will be appointed, drawn from either the civilian population or the military.

Ibrahim Boubacar Keïta was removed in a coup on Tuesday.

West African leaders have called for him to be reinstated and the UN has called for the release of officials.

But the coup leaders say they are in contact with the political opposition and other groups to try to set the transition in place.

They say elections will be held in what they describe as a reasonable time and have also promised to respect international agreements on fighting jihadists.

The opposition coalition, which had been campaigning for Mr Keïta to resign, has called for a rally on Friday to celebrate his departure.

On Thursday, the Economic Community of West African States (Ecowas) said it would send envoys to ensure the return of constitutional order.

It also called for an “immediate build-up” of the Ecowas Standby Force, a multidisciplinary force of military, civilian and police personnel, which has intervened in previous crises in the region but always in far smaller countries than Mali.

There is an increased military presence outside government ministries in the capital, Bamako, but shops and businesses have reopened.

Mali, a vast country stretching into the Sahara Desert, is among the poorest in the world and has experienced several military takeovers. It is currently battling to contain a wave of jihadist attacks and ethnic violence.

Mr Keïta won a second term in elections in 2018, but since June has faced huge street protests over corruption, mismanagement of the economy and disputed legislative elections.

There has also been anger among troops about pay and the conflict with jihadists.

What did the military leaders say?

“We are going to set in place a transitional council, with a transitional president who is going to be either military or civilian,” junta spokesman Col Ismaël Wagué told TV channel France 24.

“We are in contact with civil society, opposition parties, the majority, everyone, to try to set the transition in place.”

The transition will happen “as quick as possible”, he added.

“Mali is in a critical situation, with serious risks that a collapse of the state and institutions leads to reversals in the fight against terrorism and organised crime, with every consequence for all our community,” the 15-member Ecowas said at the end of a video summit.

The African Union earlier suspended Mali, saying military coups were “something of the past which we cannot accept anymore”.

Qnet Scam: Footballer from Mali, others stranded in Koforidua