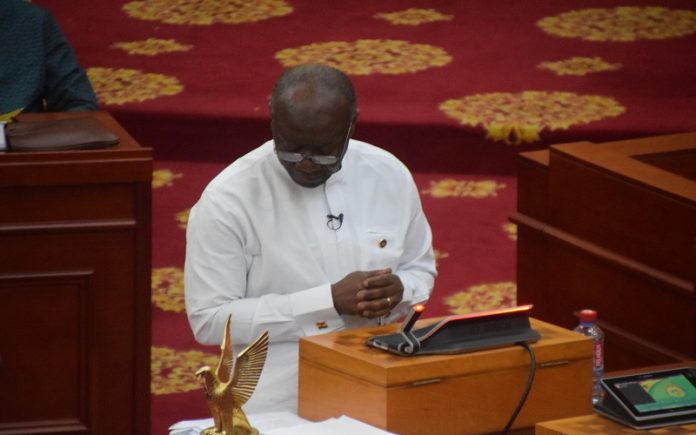 The Minister for Finance, Ken Ofori Atta is billed to justify the suspension of the Fiscal law for the 2020 financial year in parliament later today.

The Fiscal Responsibility Act makes it an offence for the Annual Budget Deficit to exceed 5% of the Gross Domestic Product(GDP).

The Minister served notice of the suspension of the law in his Mid-year budget review presentation due to the impact of the coronavirus pandemic on government’s projections.

Minister for Monitoring and Evaluation and Member of the Economic Management Team, Dr. Anthony Akoto Osei has emphasised the Minister is within his rights to suspend the law under certain conditions.

“He put a statement in the budget that he’s going to suspend it, but the way the law is he’s to bring justifications. He’s brought it and the committee has reviewed it and its proper so he’s coming to report on it,” he said.

The mid-year budget review has raised the deficit target to 11.4 percent of GDP by the end of this year from an earlier target of 4.7 percent, reflecting an additional 6.7 percent of GDP attributable to both direct and indirect COVID-19 impact, as the estimate of revenue and grants have been revised downwards and expenditures and arrears clearance have been revised higher.

The primary fiscal balance is projected at 4.6 percent of GDP from an initial target of a surplus of 0.7 percent, with the fiscal deficit path leading to a rise in the stock of public debt to 67 percent of GDP at the end of June from 62.4 percent in December 2019.

Although the government’s stimulus measures were the right direction to boost economic activity, BOG said the 2021 budget should focus on measures to return to the path of fiscal consolidation to help return to macroeconomic stability.