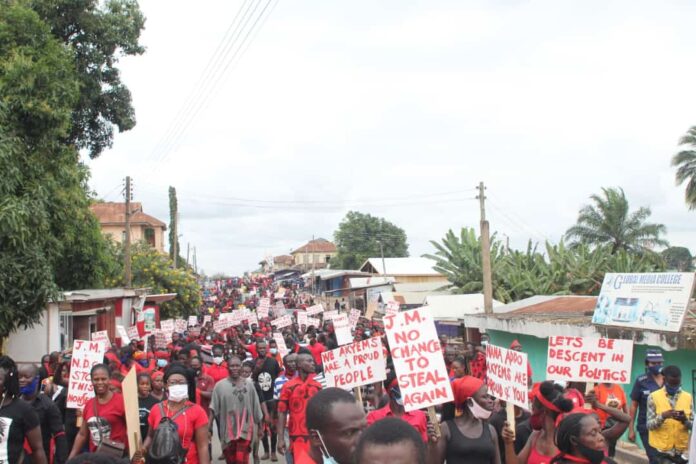 The traditional Council said it will advise itself if John Mahama fails to apologize within 72 hours.

The Traditional Council made this known during a massive demonstration at Asamankese Organized by a group calling itself Concerned Citizens of Okyeman.

John Mahama’s sharing of an article by Bolga Central Member of Parliament, Isaac Adongo on Facebook in which he labelled some individuals in government connected to the controversial “Agayapa deal” as ‘Sakawa-Akyem boys’ has sparked upproar among Chiefs and People of Akyem Abuakwa Traditional Area.

The angry chiefs and indigenes on Wednesday staged a massive demonstration at Asamankese to express their discontent.

The Demonstrators clad in red and black dresses wearing armband and headgear hoisted several placards with various inscriptions such as “divisive NDC, JM you have lost our respect, Name-calling Akyems can do worse please, NDC and JM where are your Policies, we Akyems will no longer stand for this, Let’s reject JM and NDC and its bigotry “.

Addressing the media, Okogyeaman Apegya Ofori V said all the three paramountcies in Akyem-Abuakwa, Kotoku and Bosome are demanding unqualified apology from John Mahama within 72 hours stating that they will advise themselves should the NDC leader fails to apologize.

Archibald Ntiri-Acquah the lead Convenor of the demonstration recounted a number of derogatory tribal comments made by some leaders of the NDC against the people of Akyem, stating that the NDC is fond of inciting tribes against the Akyems.

He said failure by John Mahama to apologize means the NDC will not be entertained on Akyem land.