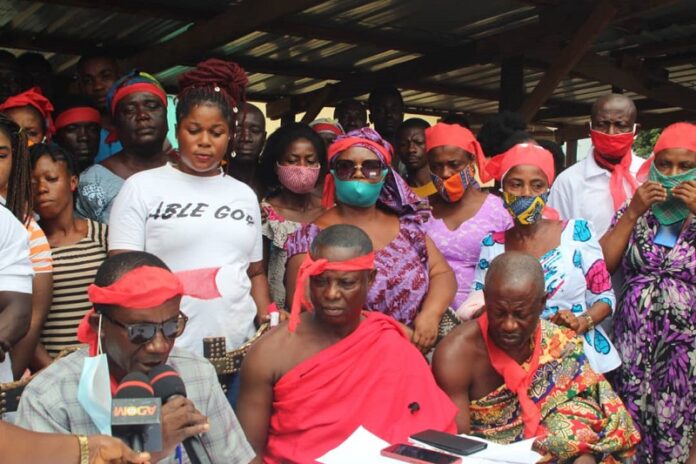 The Chiefs of Akyem Muoso in the Atiwa West Municipality of the Eastern Region are calling on the Inspector General of Police James Oppong-Boanuh to order for the arrest and Prosecution of the gun-wielding gang marauding in the community with impunity.

“We are appealing to the President of the Republic of Ghana H.E Nana Addo Dankwa Akufo Addo, the IGP and the Member of Parliament -Kwasi Amoako -Atta, to intervene and instruct the Police to arrest and Prosecute Ahenkan Boateng, Kofi Anomah, Kwasi Amoah, Kwame Dankwa and Yaw Anomah to all face the full rigorous of the law in order to bring peace to the people of Akyem Muoso”.

Addressing the media on behalf of the Chiefs, Kofi Appau -Sanaahene who also doubles as Secretary to the Chief of Muoso Barima Ofori Afam Kyekyeku stated that there has been a countless gun and machete attacks on residents of Akyem Muoso by the marauding gun wielding thugs who continue to unleash terror in the community despite the declaration by a Koforidua High Court on November 30,2019 affirming the legitimacy of Barima Ofori Afam as Chief of Akyem Muoso.

They cataloged a number of bloody attacks perpetrated by the thugs adding that “what has aggravated the situation is the recent shooting which occurred in 26th July,2020 at Akyem Muoso led by Ahenkan Boateng, Kofi Anoma, Kwasi Amoah, and Kwame Dankwa in the full glare of the public where a resident of Akyem Muoso -Daniel Okyere was shot in the abdomen which the bullet penetrated through his body.

The Chiefs lamented that “the Assembly Member Kwame Nyarko and some citizens who witness the incident reported the matter to Police but no arrest and Prosecution has been made by the Kyebi Police Command. Three (3) guns full of bullets were retrieved from Kwame Dankwa’s house and handed them over to the Police, Cartridges of the bullet is in Police Custody”.

They explained further that, the Chief of Muoso Barima Ofori Affam Kyekeku through his Lawyer has petitioned the IGP James Oppong- Boanuh, the Regional Police Commander,the BNI, Eastern Regional Minister, MP for Atiwa West, DCE among other top security officials but the perpetrators of the heinous crime have not been arrested.

The Chiefs accused the Kyebi Divisional Crime Officer who is in charge of the case for unprofessional conduct.

They alleged the crime officer failed to visit the community to investigate the incident rather went to court to secure a bench warrant to arrest the victim shot in the abdomen with the bullet penetrated at his back while on a sickbed at Eastern Regional Hospital in Koforidua.

“We are asking the Crime officer Mr. Antwi Bosiako why all matters affecting Muoso is being transferred from Kwarbeng District Police Command. We are therefore calling on the office of the IGP to conduct independent investigations on the matter in question. There is insecurity, fear and panic amongst the inhabitants of Muoso and time is of the essence “.

The Assembly Member for Muoso Kwame Nyarko accused some top party officials of the ruling New Patriotic Party for being behind the violence being unleashed on the residents and controlling the Police from discharging its professional duties in seeking Justice for the victims.

According to him, the community has prevented the director of the operation of Galampstop Kingston Okomeng Kisi who is also the Eastern Regional Chairman of NPP from mining in the community again after he failed to reclaim abandoned pits he mined around the Community which continue to claim lives of residents.

He said the gun-wielding thugs are working under the guise of members of Galampstop but invade the community to brutalize innocent residents in a chieftaincy impasse which Ahenkan Boateng is an interested party.