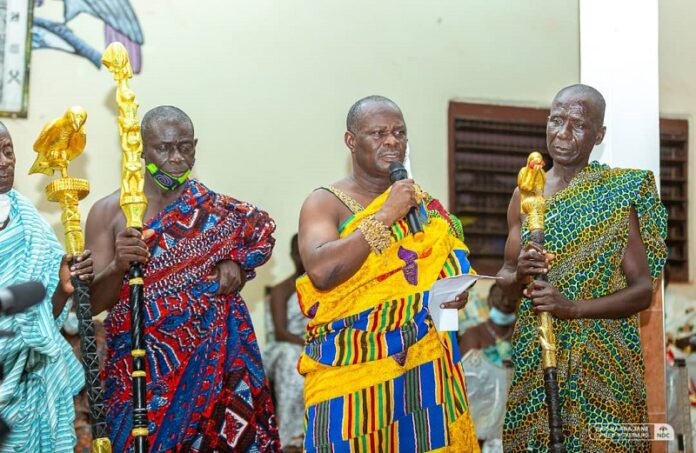 The chiefs in Asankragwa in the Amenfi West District of the Western region have declared their support for the National Democratic Congress (NDC), praying for the return of the party to government to continue its good works.

According to the chiefs, considering the track record of the NDC in the implementation of projects in the area, the return of the party would be largely beneficial to the district.
They said they were confident that NDC’s return would ensure the completion of the many projects it initiated but were abandoned by the present administration.

The chiefs declared their support on Tuesday evening when Professor Naana Jane Opoku-Agyemang called on them at Asankragwa as part of her tour of the district.

Nana Adu Boahen, Dzaasehene of Asankragwa, reading a statement on behalf of the chiefs, expressed disappointment that the area had not enjoyed any meaningful development since the NDC left office.

He cited the Community Day Senior High School project at Samraboi and road projects in Asankragwa and surrounding towns, which have been abandoned, indicating that the area had been neglected by the present government.

“We pray for your victory because we know you will complete all these projects and do more for us,” he said, amidst loud cheers from hundreds of residents who had gathered at the palace forecourt.

In addition, he said farmers in the district were eager to have the party back into governance, adding that the NDC’s free fertilizer, seedlings and agro-chemicals supply programme were highly beneficial to the farmers, especially in cocoa production.

“Our farmers are crying for your return,” he said, adding that “we know that the NDC will not disappoint us,”

Apart from the NDC’s plan to complete all abandoned projects, Nana Boahen called for the establishment of a district hospital to enhance health the delivery system in the area.
“We trust that you will solve our challenges for us when you win power,” he stressed.

Prof Opoku-Agyemang, thanked the chiefs for their demonstration of support, indicating that the NDC would continue to make governance meaningful and beneficial to the people.

The Running Mate, who also called on chiefs in Obenkrom, Manso and Dewurapong, where the traditional leaders made similar endorsements, assured the people of the district of rapid development under the next NDC administration.