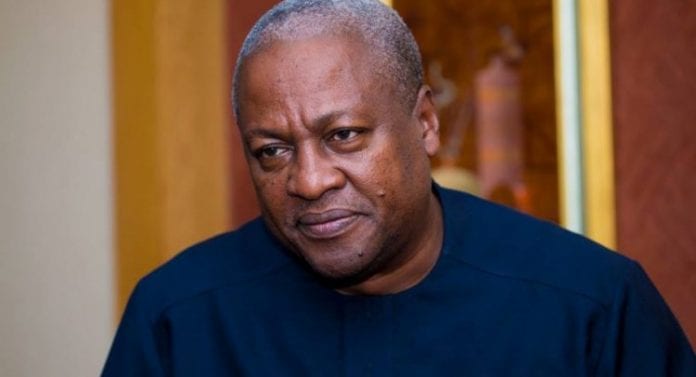 Flagbearer of the opposition NDC and ex-President, John Mahama has revealed that the question of whether he’s taken a bribe before asked him during a BBC interview which he describes as very “discourteous” threw him off the cuff.

According to him, that particular question should never have been asked him as the Western media would never ask a Western Leader such a question.

In 2016, the then President John Mahama in an interview with BBC denied ever taking a bribe.

According to him, although any individual could be lured to take a bribe, it is important for individuals to put themselves in a position to resist it.

“Any human being in the world would have encountered corruption one way or the other, either being offered a bribe or a bribe being demanded from you. What you need to do is to put yourself in a position to (resist it)..,”

When BBC’s Peter Okwoche, asked him directly if he has taken bribe, President Mahama responded, “no, I haven’t taken bribe before”.

His comments sparked a debate as to whether he was being truthful or just playing politics with the question.

But commenting further on the issue in an interview of Class FM Monday monitored by Kasapafmonline.com, ex-President Mahama stated it was the perception of the Western media that African leaders are corrupt that pushed the interviewer to ask that discourteous question that unsettled him.

“…of course it threw me off the cuff, it was a question about have you taken a bribe before? it caught me off guard I’ll tell you that. I answered it and try to clarify the question but he kept persisting and I said no I haven’t. Of course, people took advantage of that and made a lot of noise about it.”

He stressed that he’s incorruptible and actually dealt ruthlessly with issues of corruption while in power which saw one of his Members of Parliament being jailed for engaging in corrupt activities.