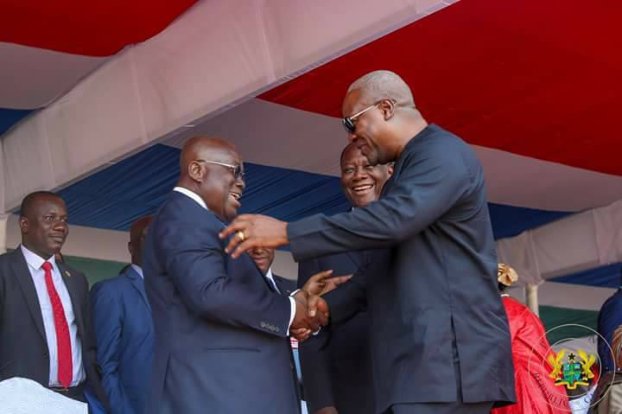 Flagbearer of the opposition National Democratic Congress(NDC) John Mahama has once again challenged President Akufo to a debate on their records in government urging the President not to heed to the advice of his party.

Mr Mahama speaking at Ho West in the Volta Region while on a four-day tour, dared President Akufo Addo to a debate on infrastructure for Ghanaians to determine who has performed better.

“We can settle it easily: Let’s have a debate between the two of us”, he challenged the President. Let Nana Akufo-Addo come and sit down, let me sit down and let’s debate our records”, Mr Mahama said.

“I am willing to present myself for a debate with President Nana Akufo-Addo any day, anytime, anywhere and we will settle the matter once and for all”, he noted.

But the National Organiser of the NPP, Sammi Awuku, said the NPP has not considered any decision to debate Mr Mahama.

“If Mr Mahama wants a debate, from where I sit today, I don’t think the NPP has given it a thought. The NPP will fight this election on our own terms. As I speak, the party hasn’t given it a thought for us to have any debate with Mr Mahama, we are going according to our campaign strategy…Bawumia put forward data-driven presentation…we want Mr Mahama or his running mate to put forward another data-driven presentation to counter what Dr Bawumia did. Let’s set that ground rules first and then we can move to the next stage.”

But touching on the issue in an interview with Class FM monitored by Kasapafmonline.com, the ex-President emphasized the importance for a debate.

“I invite him again, I think he should ignore Sammi Awuku and all the others and just come out boldly and let’s talk about our track records. It will be for the benefit of Ghanaians, Ghanaians will have a clearer picture of whom they want to vote for.”