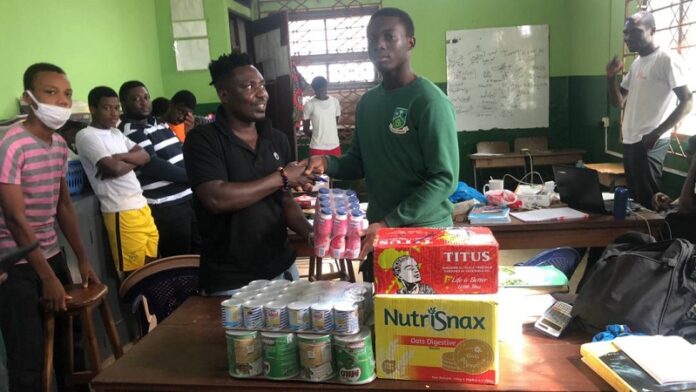 Kwahu Ambassador, Odame Agyare has donated quantities of Milo, biscuit, Titus Sardine, and Milk to the 2020 contestants of the National Science and Maths Quiz (NSMQ) from St. Peter’s Senior High School in Kwahu Nkwatia of the Eastern Region.

The Media Personality who is an old student of the school made the donation to motivate the contestants to keep a clean sheet for the school by once again winning this year’s competition.

“St Peter’s has carved a niche for itself in Ghana’s academic field. You can’t talk about academic excellence without the name of St.Peter’s. For NSMQ, our presence is always felt strongly every year we are among a few schools who have won it many times since the competition started in 1994. So this year too you have to make us proud and win. Winning the competition this year will be historic that even in the midst of global pandemic we still shine” He told the contestants.

The annual event organized by Primetime Limited is the longest-running independent production on television in Ghana.

The programme is very popular with not only its main target group – Senior High School students – but also with parents and, especially, with former students (old boys and girls), who take great pride in the performance of their schools on this programme.

According to the organizers, the objective of the National Science & Maths Quiz has been to promote the study of the sciences and mathematics, help students develop quick thinking and a probing and scientific mind about the things around them, while fostering healthy academic rivalry among senior high schools. Without a doubt, these aims have been achieved.

The quiz popularly referred to as “brilla” by many who have gone through the secondary school system is by far one of the few academic events that bring all of Ghana’s secondary schools together to display their intellect.