Deputy Youth Organizer of the ruling New Patriotic Party(NPP) in the USA, Prince Kamal Gumah, has donated 15 motorbikes to indigenes in the Northern and Upper East Regions to support them.

Recently, he has been engaged in an initiative with the Director-General of Ghana Ports and Harbor Authority; Mr. Michael Luguje to drill 28 boreholes in the Upper East and some other communities in the Northern Region. 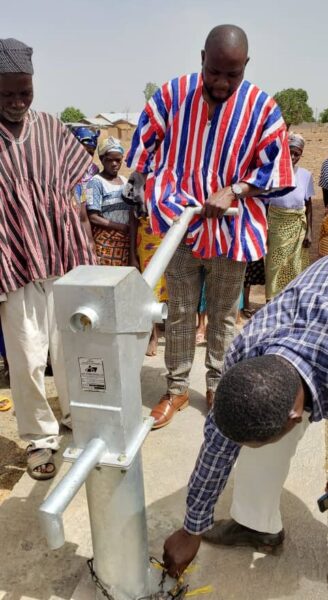 Being a staunch and dedicated member of the ruling NPP, Kamal believes in His Excellency; the President’s speech about being citizens and not just spectators.

He is of the view that as citizens, it is our responsibility to effectively play our roles by making our communities better and not leaving everything to the government all the time.

In an interview with this portal, he emphasized the need for education and commended President Akufo Addo for the implementation of the Free Senior High School programme.

He reckons the free SHS policy is one of the most important elements for the northern youth and there is no excuse now for not being in school.

In terms of healthcare, Mr. Kamal is very impressed by the 1 Constitituency 1 Ambulance initiative that was executed by the Government of Ghana. He commended President Akufo Addo for having a soft ear for the citizenry and his willingness to improve living standards by making their lives better.

Prince Kamal Gumah noted that President Akufo Addo who’s also the Flagbearer of the NPP has and will always have amazing policies that seek to benefit the people of Ghana.

He consequently urged all to vote for Nana Addo Danquah Akufo-Addo and the NPP in the upcoming 2020 December 7 elections.