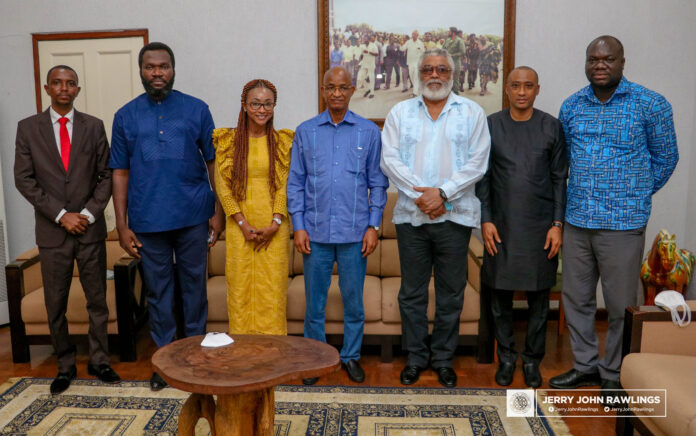 Former President Jerry John Rawlings, has urged the current leadership of the Republic of Guinea to exercise good leadership in discharging its responsibility, to ensure that the sanctity of the upcoming elections in the country is not compromised.
The former President also urged the military and other security agencies in Guinea to uphold the values and ethics of the institution to discharge justice, maintain law and order and restore peace and cohesion.
Former President Rawlings who made the call during a meeting on Monday with Cellou Darlein Diallo, a former Guinean Prime Minister and currently the leading opposition leader, also called on newly elected President of the Economic Community of West African States (ECOWAS), Ghana’s President Nana Akufo Addo, to exert his authority and values of integrity and the rule of law as the ECOWAS Chair, to intervene in the political situation in Guinea ahead of the October 18 elections.
“A framework should be put in place to look into the allegations of injustice, oppression and political victimisation in that country to pave way for a successful, transparent, inclusive and free and fair organization of the upcoming elections,” former President Rawlings urged.
The former Ghanaian leader also used the occasion to commend the President of Nigeria, Muhammadu Buhari for speaking out against the tendency of some leaders to amend their national constitutions to extend their stay in power. He urged African leaders to heed the counsel of the Nigerian leader.
CONSTITUTIONAL AMENDMENT
Earlier, Cellou Diallo who was accompanied by his Chief of Cabinet, Nadia Nahman, said Guinea was facing political challenges ahead of next month’s elections. Of particular concern was the fact that incumbent President Alpha Conde had supervised the amendment of the constitution to enable him contest a third term without consulting opposition parties, while using the military to intimidate the opposition.
“Mr. Condé’s candidacy was announced on national television on Monday August 31. This situation, along with many other social and political issues, is leading Guinea towards a very perilous path, Diallo stated.
According to Diallo, even though Guinea is rich in natural resources poor governance had affected the peace and stability of the country.
Mr. Diallo who is the leader of the Union of Democratic Forces of Guinea (UFDG), Regional and international partners such as the OIF (Organisation Internationale de la Francophonie), the EU, the UN, France, the United States, the United Kingdom and Germany, have reportedly denounced the arbitrary change of the constitution to perpetuate Conde’s stay.
ECOWAS INTERVENTION
Diallo appealed to former President Rawlings to use his office and his integrity as a highly respected statesman to intervene by urging the ECOWAS leadership to restore law and order in Guinea. He stressed the need to commence the dialogue decided by ECOWAS, whose preparatory meetings took place in July and August 2020 with a clear objective to iron out the differences between the political actors and to identify and implement all the actions that would make it possible to organize a peaceful, democratic and inclusive presidential election.
“Whiles the opposition continues to await the arrival of the ECOWAS mediator, Mr. Alpha Condé continues to roll out his agenda to organize at all cost the presidential election on October 18, 2020, when the conditions for a transparent election are far from being met. The opposition, during the preparatory meetings, had indicated that it was flexible on the date of the elections and was willing to postpone in order to guarantee the organization of a free and fair election to promote peace and security,” Diallo stated.