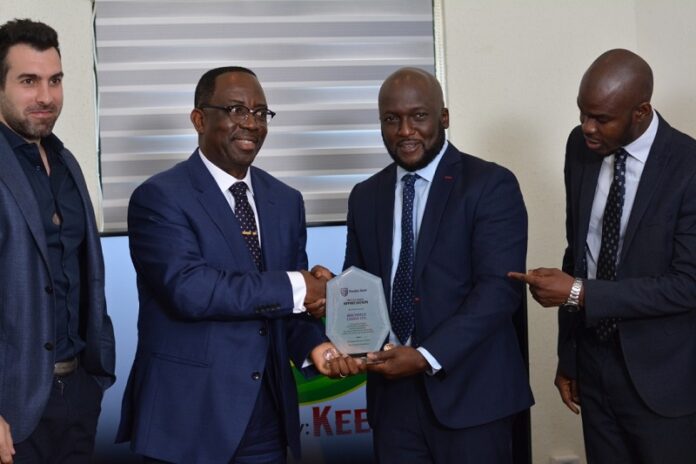 KGL Group has been presented “The Most Outstanding Customer Award” by the Management of Stanbic Bank Limited.

The Award was presented to Mr. Alex Dadey of KGL by Nana Dwomoh Benneh, a Management member of the Bank when a delegation from Stanbic Bank Limited paid a courtesy call on the KGL Group at the Company’s Head Office at Labone in Accra.

After receiving the Award, Mr. Alex Dadey, the Executive Chairman of KGL Group of Companies, disclosed that KGL Group and Stanbic Bank Limited have had discussions about a possible partnership to share expertise in all areas for customer benefits and satisfaction.

According to Mr. Alex Dadey, the partnership is to bring the expertise of KGL Group in the digital space fully on board aimed at improving the quality of service of the Stanbic Bank Limited, and other institutions which KGL Group is currently working with such as the National Lottery Authority(NLA) and others. Mr. Alex Dadey listed several achievements of KGL Group in the last three years of existence especially the digitalization space with an employee strength of over 100 personnel.

On behalf of Stanbic Bank Limited, Nana Dwomoh Benneh also said that the partnership between KGL Group and Stanbic Bank Limited is aimed at improving the services beyond the regular banking traditions in providing services to customers and clients. He said that, the two institutions have grown together as Service Providers and that there was the need to maintain and strengthen the relationship between KGL Group and the Stanbic Bank in order to promote the business they both run for the benefit and satisfaction of customers and clients.

KGL Group has been at the forefront of providing top-notch technical services as well as lending world-class expertise to its partner companies such as the National Lottery Authority(NLA) and others.

The Government of Ghana through the Ministry of Finance recently launched three key policy initiatives such as:
1. The National Financial Inclusion and Development Strategy
2. The Digital Financial Services Policy
3. The Cash-Lite Roadmap.

These three policy initiatives are aimed at strengthening financial inclusion and accelerate the Shift of the economy to Digitalization.

In line with the aforementioned three policy initiatives, KGL Group has positioned itself well to become one of the very best platforms in order to support Government and other organizations to achieve the digitalization policy of Government, and also compete fairly on the global market.