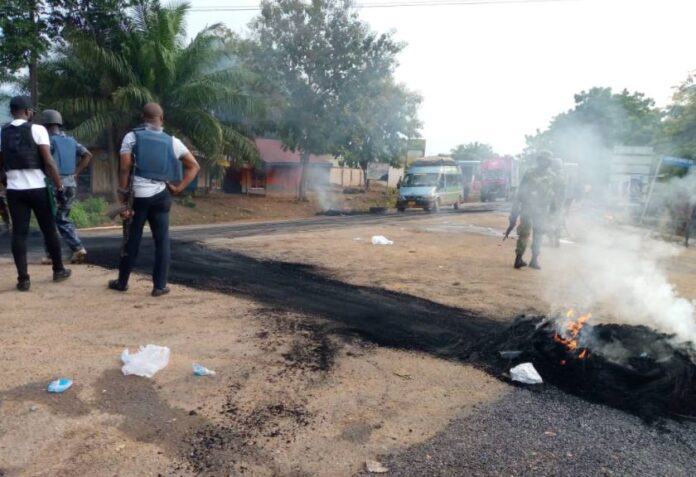 With barely two months to a critical elections in Ghana, there is growing insecurity in the country which the government helplessly is unable to find antidotes to. Apart from the much publicised so-called Volta secessionist groups activities, there is trending murder, armed robbery and thuggery proliferating everywhere in the country. It is not clear why there seems to be no solution to these dangers in the society, but a clue is emerging pointing to a certain source.

The regular security forces have apparently resolved not to risk their lives to fight crime in the country ever since it emerged that vigilante forces of the New Patriotic Party (NPP) have been secretly integrated in their ranks. These stubborn goons are acting with impunity because of the manner they were recruited into the security services. Their remnants are strongly pointed at as the ones behind the criminal activities in the country.

They began with disrupting court proceedings in Kumasi and causing mayhem in Tema.

The recent road blocks in the Volta region being blamed on the Volta secessionist group have been denied by the group and is rather being linked to elements hired by the government to cause confusion.

Since the discovery of their secret training in the castle by Manasseh Awuni Azure, the country has not known peace. Journalists have been silenced by the government, some even killed painfully. The death of Ahmed Suale was a strong signal sent to journalists to stay away from exposing the heinous activities of Akufo-Addo’s all die be die forces.

As always is the case, a badly trained dog will bite its owner one day. The NPP Kandahar boys were rampant in destroying property at the Tamale Teaching Hospital while trying to remove its Chief Executive Officer from office. As the NPP vigilante forces realized they have been cheated while Double and co benefit, they took to social vices to survive.

They are deployed randomly on criminal missions at will; the results are now manifesting in society. The Member of Parliament for Mfantseman was gruesomely killed in an ambush just last week. Prior to that a senior lecturer at the University of Ghana School of Law was murdered in his house.

The criminals have been emboldened because the government appears to lack any iota of competence to ensure security in the country. Many crimes have been committed without any conclusive investigation and punishment of culprits. Major Mahama on lawful duty for the state in Denkyira Obuasi was lynched to death. Almost three years after, the state has not been able to deal with the perpetrators.

Akuffo Addo is on record to have vehemently pledged to find the killers of the late legislator J.B. Danquah Adu, but as of now, there is no hint of an effort to give effect to this promise. An assemblyman was murdered in cold blood at Sogakofe recently; nothing happened to the killers. Policemen, chiefs, national security operatives and others have all suffered gruesome killings which the national security apparatus has no clue to deal with. In Kasoa at the moment, a self-styled Alhaji with strong links to the ruling NPP is terrorizing people with impunity.

The most painful of all the killings was the kidnapping and killing of the 4 Takoradi girls. Government had disgracefully mishandled this particular issue in such a way that it has almost convinced everyone that the Akufo-Addo government was behind the killing of the girls. The pain in the parents hearts continue to boil as government refused to let them carry out their own DNA tests to verify the claims of the state.

A nurse was crudely murdered near Bekwai on her way from work. The President of the country has acted so poorly in these matters that there is no trust in his ability to protect the citizens of the state.

As the country approaches a crucial elections, the current insecurity in the country bodes calamity if God does not intervene. The problem is compounded by the regular discovery of arms importation into the country. Questions are arising as to who is behind these arms movement and what they are intended for.

Fears are growing that the government is arming the NPP’s Invisible Forces for criminal duties during the upcoming elections.

A day after arms seizure at the Tema port, there was another arms smuggling intercepted at the Kotoka International Airport. Cocaine pushing has returned big time while money laundering has become a norm in the country.

It is no longer safe to be walking about freely in Ghana now. Akufo-Addo has deliberately failed to ensure our security. Kofi Koomson’s warning has become relevant. We must be wary!