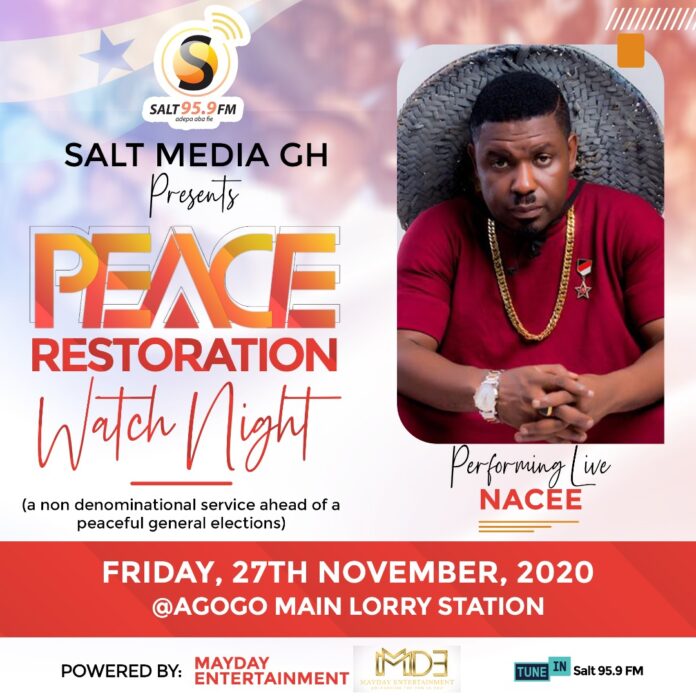 MayDay Entertainment in collaboration with Salt Media GH has launched the maiden edition of Peace Restoration Watch Night Ahead of the December 7 polls.

The live worship all-night service will be held at the Asante Akyem Agogo Main Lorry Station on Friday 27 November 2020.

The event is a multi-denominational gathering of believers to engage in a night of endless prayer, live worship and intercession for Ghana as the country goes into its general election on December 7; so that there will be peace in Ghana before, during and after the polls.

Speaking in a special virtual announcement interview, Kelly Nii Lartey Mensah, an associate of MayDay Entertainment (and aide to the CEO of Salt Media GH, Ohene Kwame Frimpong) explained that, the Watch Night is essential in reinforcing the peace message into the hearts of citizens, so that, together we can safeguard and protect the democracy and rule of law according to God’s will. 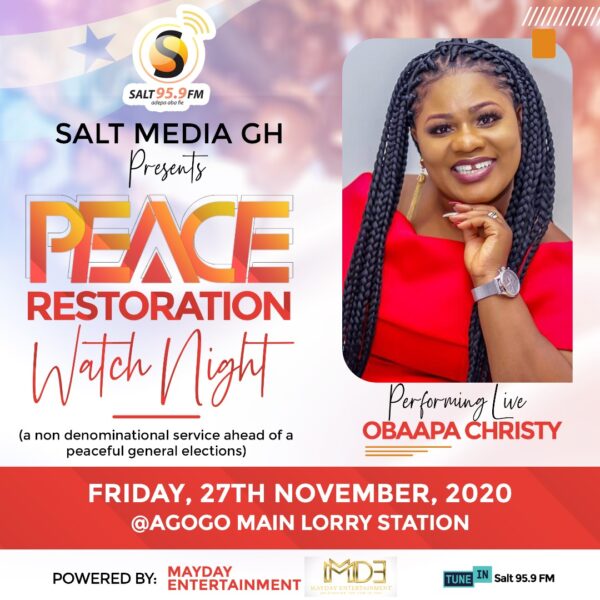 “We are worshipping and calling on God to smite and wash away any violence causing agents and safeguard our territory in the realms.”

The Peace Restoration Watch Night is blessed to have amazing, award-winning gospel performers, who will charge the atmosphere as listeners join from across the globe through Salt 95.9 FM on TuneIn and on Facebook Live to worship with Ghanaians — to pray and intercede for the country. Ceccy Twum, Queen Debby, Black Lace Band, Richard Mensah MP Nation, Jackson Quaye and of course Nacee Obaapa Christy are leading various sessions of the Watch Night.

The Watch Night is a concept by MayDay Entertainment in partnership with Salt Media GH, a Ghanaian owned media empire that owns and operates Salt 95.9 FM in Asante Akyem Agogo, Saltfmonline.com and Salt TV.

Ghana goes into an election on December 7, 2020, to elect its parliamentarians and head of state.