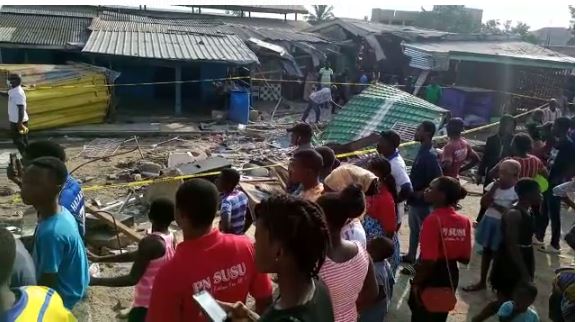 A tipper truck loaded with building stones on Tuesday dawn crashed into 15 shops at Awutu Breku in the Central Region leaving the driver and his mate seriously injured.

The accident occurred after the truck with registration number GG 32-51-19 failed its brakes.

The two who were the only victims were rushed to the Awutu Bereku Health Center for treatment.

Fortunately, the shops were closed at the time of the incident which explains the fewer casualties.

Some traders and owners of the shops who expressed shock over the incident thanked God that they’re still alive but were sad that their shops have been destroyed.

Officials from the National Disaster Management Organisation (NADMO) and the Police Service are at the scene to manage the situation.