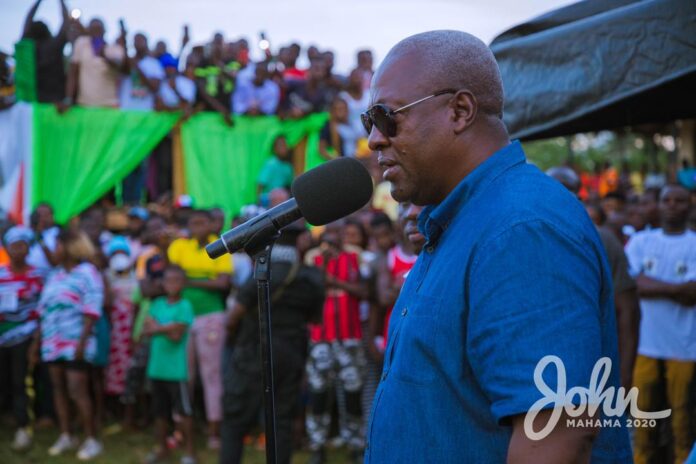 Every leader worth his salt must have certain superlative leadership traits, and must be able to lead a culture of change. Key among these traits is truthfulness and the ability to plan the future with wisdom. And Ghana is blessed to have H.E. John Dramani Mahama. He has been consistently truthful to the people of Ghana, and his ability to plan into the future for the benefit  of Ghanaians has been matchless.

For instance in the case of his truthfulness to the citizens of Ghana, most of his 2012 campaign promises were fulfilled.  Even though he spent close to a year at the Supreme Court in the election petition case, President Mahama completed one ultra-modern Teaching Hospital at Legon and expanded the Tamale Teaching Hospital by 400 more beds. He built a brand new 500-bed Military Hospital in Kumasi. He constructed 6 regional hospitals, at least 14 district hospitals, over 26 polyclinics, and more than 18 health centres, just to mention a few.

In the area of education, more than 1,000 different projects were executed in the second cycle level; excluding the 200-day SHS project, many of which were at various levels of completion before he left office. At the basic level, countless number of classroom blocks were constructed in an effort to eliminate schools under trees which led to the abolition of the shift system.

US$1.1 billion was spent on the construction of new water systems, and expansion of some existing ones across the country.  76% of the entire country, both rural and urban areas had access to good drinking water under his regime. This was the second highest in Sub-Saharan Africa. Unfortunately, many of these essential water systems have ran down because of lack of maintenance.

Other initiatives  include extensive major road projects in all the then 10 regions of  the country, among these are the 3-tier ultra modern Kwame Nkrumah interchange, the eastern corridor roads, Fufulso-Sawla road, etc.; began the construction of an 800-kilometre fibre optic ICT backbone infrastructure in the eastern corridor to provide broadband services to over 120 communities along the route from Ho to Bawku, with links to Tamale from Yendi; expansion of Tema Port, expansion of Takoradi Port, construction of Terminal 3 at the Kotoka International Airport, expansion of Tamale and Kumasi Airports, completion of the Atuabo Gas plant, exploration of  major oil blocs, namely: Ten, Gye Nyame, and the Volta Basin, among others.

With these achievements, it came as no surprise when he was honoured by the Diasporan Association For Good Governance (DAGG) for being the best President Ghana has ever had since the days of Nkrumah during their 10th annual gathering where they honour world leaders who have helped or are involved in making Africa a model continent.

In the area of his ability to plan into the future to ease problems of the good people of Ghana, many projects come to mind, but I want to mention only one because of space and time. Before the construction of the Kwame Nkrumah Interchange, about 84,000 vehicles moved through the Kwame Nkrumah Roundabout everyday, and during rush hours, traffic was choked making motorists spend hours on end before they were able to pass through.

One of the worst critics of the Mahama administration for once applauded former President Mahama for conceiving the idea of the construction of the Kwame Nkrumah Interchange. His reason was that there used to be heavy traffic from Accra Central through the Kwame Nkrumah Circle especially on every Christmas Eve, and people always have to walk long distances to get home. According to him the story has been different ever since the interchange was constructed, and that there has been free flow of traffic at Circle any day, something that has not happened in decades.

Moving forward, President Mahama has promised the people of Ghana many things through the NDC 2020 manifesto which include free primary healthcare at district hospitals and below if he becomes president of the Republic in January, 2021.

Even though social interventions such as free Senior High School education is very needful, the  provision of free primary healthcare to all Ghanaians, young and old is going to be the biggest social intervention in the history of Ghana. Many have died and are still dying from elementary diseases such as malaria, diabetes, diarrhea, hypertension, etc. because of financial constraints. This intervention is, therefore, going to be a huge relief to the people of Ghana.

There is an Akan proverb which says that if someone who has chewed a calabash tells you that he or she can chew a crab, never be in doubt. Former President John Dramani Mahama did much in his 4-year stint as president, and there is no shred of uncertainty that he will fulfill his promises.

He has a genuine desire to contribute to our beautiful country, and I believe down my heart that he will not deviate from that path; he will not falter because his heart is pure and his faith is strong.