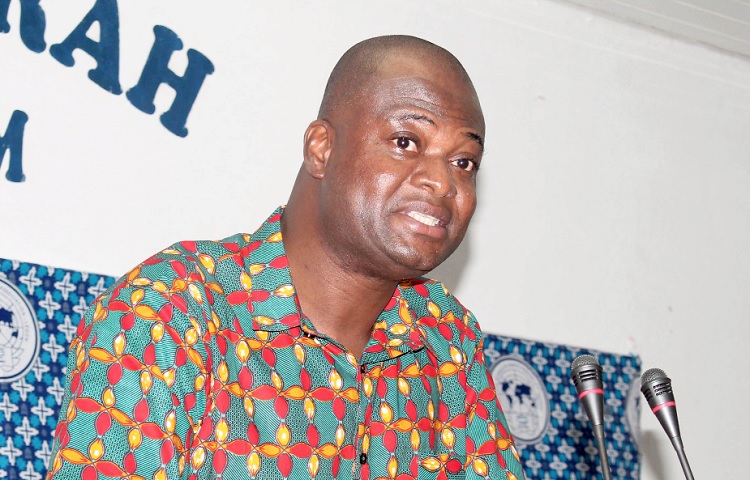 The Dean of University of Ghana(UG) School of Law, Prof. Raymond Atugubah, has threatened to lead the campaigns against the impeachment of the leadership of the University Teachers Association of Ghana(UTAG) vis a vis the passage of the controversial Public Universities Bill(PuB).

“Unless UTAG (local and national) are able to work through the night TODAY, to provide a ROADMAP by tomorrow morning, establishing a clear PATHWAY for stopping the passage of the PUB” he noted in a memo to UG-UTAG Colleagues on PUB.

He believes the law in its entirety has inherent dangers that will cripple public universities in Ghana.

“I have had the privilege of drafting or assisting to draft over 300 policies and laws on the African continent in the last two decades, and I can confirm that the PUB is one of the worst laws I have ever encountered. It is just bad, bad, news.”

But the minority in parliament is demanding further stakeholder engagements before the passage of the controversial Public University Bill which has been taken through the second reading stage.

Speaking to the report of the Committee on education which recommends passage of the bill, minority leader Haruna Iddrisu argued consultations are not exhaustive even after government stood down the bill following agitations from UTAG, Vice-Chancellors, Ghana Academy of Arts and Sciences among others.

The stakeholders had argued the bill when passed will stifle academic freedom.

The Tamale South MP stated the NDC will not be part of the passage of the bill if government fails to consult far and wide since there are still inputs from stakeholders that must be fused into the bill before passage.

“We want the legitimate concerns of the University lecturers, Teachers and Students in the governance of Public Universities to be appropriately covered as we proceed further on this bill,” Minority Leader Haruna Iddrisu said on the floor of parliament.

We really need to thank all those putting in hours to ensure that the PUB is not passed in the state in which it is. I am reliably informed that the Public Universities Bill (PUB) could be passed into Law in the next 24 to 72 hours, or even sooner! So forgive me if I go directly to the point.

Unless UTAG (local and national) are able to work through the night TODAY, to provide a ROADMAP by tomorrow morning, establishing a clear PATHWAY for stopping the passage of the PUB,

I will be in the lead to ensure their impeachment and more. We know how hard they fight for our conditions of service and for BRA, and the many strikes we have embarked on in furtherance of these. We are therefore confident that we have capable leaders who can ensure that this nefarious law, that threatens our very existence as a university, is not proceeded with in Parliament; and if speedily passed by Parliament, does not receive presidential assent.

I have had the privilege of drafting or assisting to draft over 300 policies and laws on the African continent in the last two decades, and I can confirm that the PUB is one of the worst laws I have ever encountered. It is just bad, bad, news.

It is glaringly and patently unconstitutional (so no Parliament or MP has any business passing it into law);

It seeks to politicize the Public Universities (can’t we have at least one institution in the country that is not politicized);

It seeks to establish Executive and Ministerial micro-management of public universities, (effectively crippling them); and

It is very badly drafted in several areas (not the fault of the drafters; they had a horrible policy to work with).

From the first Clause of the Bill to the last Clause, there is almost nothing good about it. Literally all the clauses contain fundamental policy and legal challenges and faux pas that no democracy, no Parliament, worth its salt, and no Ghanaian should countenance. Let me prove this assertion of mine with reference to the very first Clause and the very last Clause of the Bill. I will also subsequently establish that what comes in between the first and the last clauses are even worse.

Clause 1 of the Bill moves the power to establish a Public University from 275 Members of Parliament, representing 35 million Ghanaians, and vests that power in one man-the Minister for Education. What madness is that? It is true that the power is exercised by Legislative Instrument (L.I.), but we all know that L.I.s are not subjected to as much scrutiny by Parliament; hardly receive public input; cannot be amended by Parliament; require two-thirds majority of Parliament to be annulled-a majority that Parliament is hardly able to garner; and can so easily be silently stolen through Parliament and become Law.

This is what Clause 1 does. In the same vein, the Minister, by L.I., can kill a University, by simply deleting it from the First Schedule. See Clause 53. Why would any one person want so much power? Why should we vest so much responsibility in one single, fallible human being? What is wrong with the previous mechanism of having all the MPs deliberate on and improve the provisions of a Draft Bill for the establishment of a university, with public input over several months, in order to arrive at a law that befits Kwame Nkrumah’s Ghana?

Please believe me when I say that there is nothing good about the PUB. Even the parts of the PUB that appear to be positive are poisoned chalices. Take, for example, the provisions in Clause 48 on Academic Freedom, which is ordinarily a good thing. The PUB introduces claw-back clauses on Academic Freedom, whilst pretending to guarantee it. Thus, it limits this fundamental right to “traditional principles of academic freedom” and focus more on “responsibilities” and “accountability” than on Academic Freedom.

And make no mistake about it; the original PUB is better than the Revised PUB. I spend many hours reading and analyzing the revised Bill yesterday and today, right down to commas and full stops. That is why I know that Clause 44(2) uses the word “pubic” instead “public” (to Paraphrase Vice President Bawumia, when you purpose to do something bad, something will expose you); Clause 32(2) is missing a full stop; Clause 49(3) should read “attributable…to” and not “attributable…on”; Clause 51(7) should read “chairperson” and not “acting chairperson”; and Clause 50 is not legally comprehensible. Above all, for a Bill that is said to have been withdrawn from Parliament and re-laid (as publicly announced by the Minister on radio today), the date of gazette notification should not still be 20th February 2020, which antedates the purported withdrawal. This also means that the entire parliamentary process of proceeding with a Bill that has not been re-gazetted, is contrary to Article 106 of the Constitution, and Parliament may be acting unconstitutionally in proceeding with the Bill.

The PUB also purports to vest in the President the power to dissolve a university council and to appoint an interim council. Contrary to the provisions of Clause 8(5) of the Bill, Article 297 of the 1992 Constitution of Ghana does not grant any power to any person to dissolve the Council of a University and to appoint an interim council. It is remarkable that the Bill does not say which of the 10 clauses of Article 297 gives the President that power. The closest is Article 297 (a), and that provision, arguably, refers to regular public officers, who retire at 60 and may be on contract till 65, and not to members of statutory boards and councils.

What is particularly disheartening about the PUB is that its entire spine and its central nervous system are designed to achieve micro political control of public universities. Micro politics is that within which the PUB “lives, moves, and has its being”, as the Catholics say. Out of the 16 members of the University Councils, 9 are appointed by the President, directly or indirectly. This is a novelty and an affront to the spirit of the 1992 Constitution, which aims to create political independence of public universities and their employees. And the quorum for a meeting of the Councils is 8 (Clause 12), meaning that only government appointees may meet as a Council and determine the governance of the University. It also means that Government can procure any decision of the Council by whipping its direct and indirect appointees in line.

As if this is not enough, where the Chair of the Council is absent at a meeting, only a presidential nominee to the Council may Chair the meeting; no other member of Council may chair the meeting (Clause 12(3)). Remember that the Chair has a casting vote in the event of a tie, and so for micro politics to reign, it is critical for the Chair or Interim Chair to always be a presidential nominee. This assures absolute presidential or Executive control over decision-making at the highest level of the University (Clause 12(4)).

Thus, if this Bill passes, when my application for promotion comes before the new Council, 8 of the 9 government appointees can constitute a quorum, convene a meeting of council, remember how I blasted them in this email, and deal with me accordingly. Worst still, If I apply for promotion whilst the Interim Council is in place, the President and Minister can change the composition of the council to 100% party foot soldiers, convene a council meeting, consider it, and deal with me accordingly. I know some of you do not believe this-READ CLAUSE 56 OF THE BILL ON TRANSITIONAL ARRANGEMENTS.

This email is getting too long, so let me conclude. And forgive my garrulousness; I strongly feel that a university which has a Faculty of law should not condone anything that is unconstitutional, especially when such unconstitutionality undermines Academic Freedom. To some specific ways in which the PUB undermines Academic Freedom and the fecundity of public universities, it is now necessary to turn.

Clause 19 provides that no public university may have more than 2 Pro VC’s. Why is Parliament trying to draw our organogram for us? Clause 20 excludes Directors from the membership of Academic Boards of Public Universities, unless the Statutes of the University provides otherwise. The definition of “public tertiary institution” in Clause 54 means that no one without an SSS Certificate or higher, may be admitted to a public tertiary institution. What happens to our mature students who have no SSS certificates?

Finally, there are some things hidden in the First Schedule to the Bill. This Schedule provides for the mandate of each public university, in a very restrictive manner. Under that Schedule, if you are able to forgive the incorrect turn of phrase in the language they use, GIMPA, for example, would have to close down their Law Faculty.

VIDEO: Watch what Shatta Michy was caught doing in her pub