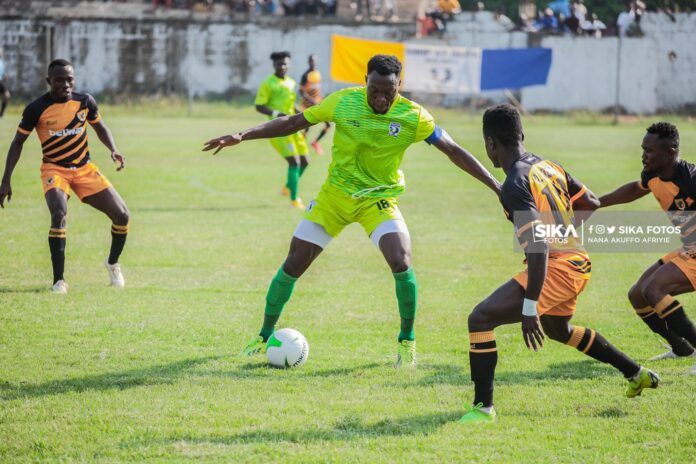 Bechem United on Sunday, beat AshantiGold SC 1-0 to maintain their unbeaten run in the Ghana Premier League. The victory over the Miners sent them to the top of the League table with 14 points.

Boubacar Sidiki Doumbia and Clinton Duodu were handed a rare start as they took the place of Charles Bosompem and Emmanuel Owusu Boakye.

The Miners also made changes to the side that drew 1-1 as Michael Enu and Dacosta Boadu replaced Kwame Moses and Jacob Apau in the starting line up. The first opportunity of the game fell to Bechem United but AshantiGold goalkeeper Mohammed Bailou made an astonishing save to keep the game at 0-0.

Former AshantiGold player Steven Owusu finally broke the deadlock inside 54 minutes to hand the home side the much-needed lead.

Bailou made another spectacular save to deny the hosts to double their lead.

AshantiGold continued to put pressure in search of the equalizer and youngster Isaac Opoku Agyemang effort was well taken care of by the Bechem United defence.

The home side then coiled into their half and started playing on the counter. They began to frustrate the visitors with the aim of protecting their slender lead.

The win takes Bechem to the top of the league standings as they remain unbeaten after six matches having won four and drawn two.