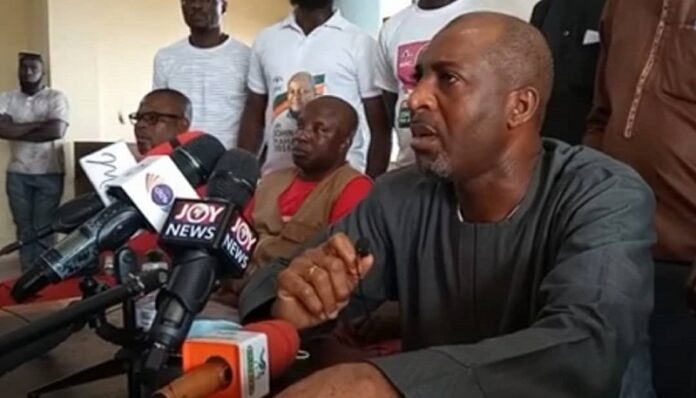 The Member of Parliament for Asawase, Muntaka Mubarak, has accused the Electoral Commission of scheming to rig the December 7 elections to favour his opponent, Alidu Seidu.

His accusation comes on the back of a decision by the Electoral Commission to use the residence of the Asokore Mampong Chief as Collation Centre for the Constituency.

At a press briefing on Monday, the Minority Chief Whip said the processes leading to the settling on the chosen venue for collation is a total departure from how it was done in the past.

He explained that throughout the years, a venue for collation was selected via stakeholders’ consultation with the EC and security agencies.

“This year, we saw a very worrying phenomenon where the MCE who is also the NPP’s candidate, together with the Electoral Commission called the Security agencies to call and inform us [NDC] that the collation centre will be Asokore Mampong Hene’s house“, the Asawase MP claimed.

In the MP’s view, the absence of stakeholder consultation in deciding on the venue for the collation and the actions of the security agencies involved raises a lot of suspicions and lends credence to rumours of intended election rigging.

“There was a meeting to deliberate on the issue. Out of the six parties present, four voted against the idea of using the Chief’s palace as collation centre and only two voted in favour,” the MP said, adding that the security officers present after the vote to decide on the venue requested a week for further deliberations.

However, the decision, they later came to say, remains unchanged, much to their chagrin and utmost surprise. Mr Muntaka cautioned the EC against using the intended venue for the collation of results.

He stated that if the advice is not taken, he will mobilise thousands of party supporters and match them to the venue on the due day to be used as what he called a “human shield” to protect the will of the people.

WHY NDC IS AGAINST THE CHIEF’S PALACE

The party believes that the palace is situated way in the outskirt of the constituency.

They cite, among other things, the bushy nature of the area and the existence of the myriads of uncompleted buildings surrounding the palace and contend could serve as hideouts on the election day for anybody with nefarious intents.

Another issue raised by the MP is traffic jam on some major streets within the constituency at sunset. Motorists coming from town, headed for the side of the constituency where Asokore Mampong is, have to endure the gridlock.

This, the MP suggests could result in the delay in getting ballot boxes from Akwatia Line, New Zango, Asawase East & West, Aboabo and adjoining areas to the Asokore Mampong Chief’s palace, the intended collation centre.

Asokore Mampong electoral area has always voted for the ruling NPP both in presidential and parliamentary elections since 2004 when Asawase Constituency was created.