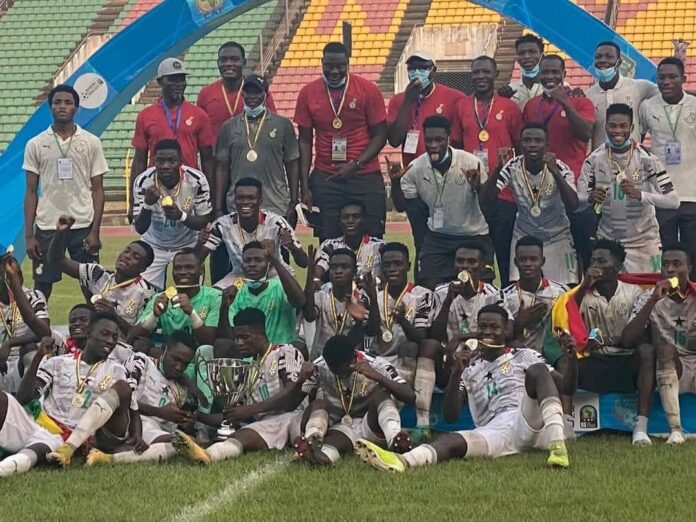 The Black Satellites came from behind to beat Burkina Faso 2-1 at the Charles de Gaulle stadium in Porto-Novo, Benin.

The Young Stallions had the best attacking machinery in the competition scoring 8 goals in four games including a 4-1 win against Ivory Coast in the semi-finals.

They started the game strongly dictating play in the opening minutes of the encounter.

They were rewarded in the 16th minute when Kouame Jean Fiacre Botue broke the deadlock as he pounced on an error in the Ghana defence and hit the ball past Ibrahim Danlad.

With just about 5 minutes to end the first half, the Black Satellites got the equalizer through Daniel Afriyie Barnie who latched onto a Percious Boah free-kick in the 40th minute.

Burkina Faso nearly increased their lead before the break but the crossbar came to the rescue of the Black Satellites as Hamed Quattara cross graced the woodwork.

That was the last action in the first 45 minutes of the game as the teams headed to the locker room for a break. The first half ended with both sides levelled up.

Danger man Percious Boah once again scored from a free kick in the 79th minute from 35 yards to increase the lead for the Black Satellites.

The former Still Believe striker took his goal tally to two goals after netting against Nigeria in Ghana’s opening game.

The Burkinabe’s complained to the referee the ball had not closed the line but the assistant line II had none of it, with the center referee Clement Franklin Kpan from Cote d’Ivoire pointing to the centre line for play to restart.

The Black Satellites held onto the lead to clinch their first WAFU title in this category.

Ghana and Burkina Faso have already booked a place in next year’s Africa U-20 Cup of Nations to be staged in Mauritania after making it to the finals in this zone.