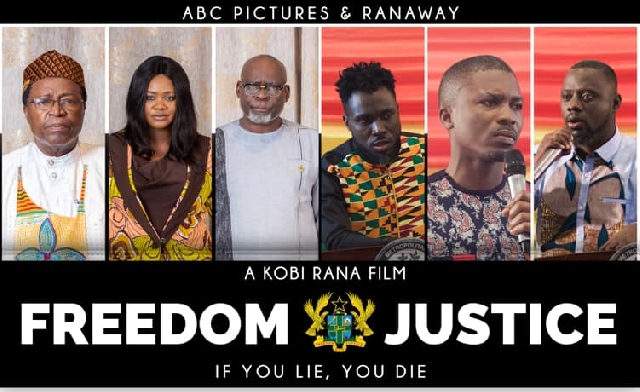 The Ghana Tourism Authority (GTA) has halted a newly produced movie by Ghanaian singer and Filmmaker, Kobi Rana from premiering at venues designated.

The general public’s attention has however been drawn to a news release by the production house to announce the inconveniences caused on social media.

The ‘Freedom and Justice’ movie which was set to have premiered tomorrow, December 25, at Accra, Tema and Kumasi respectively was cancelled as stated in the communique that the Ghana Tourism Authority petitioned and ‘locked’ all venues allocated for the movie premiere.

Our venues were served with letters from the Ghana Tourism Authority to stop showing the movie. These venues were later visited, warned and locked with armed policemen. It is unfortunate no letter was sent to us but our venues rather.” He stated

The production team, therefore, assured to refund to individuals who purchased the tickets and rendered their profound apologies to the managers of the said locations for the mishap.

“We would like to apologise to all locations for the inconveniences caused and our cherished audience for the unfortunate turn of events. In the past 17 years of providing you with quality entertainment, we stand for peace and customer satisfaction. We, therefore, abide by the decision of the authorities and adjourn the Movie FREEDOM AND JUSTICE.

All tickets bought may be returned to the same outlets for a refund. We will give you an update on the next schedule for your favourite movie: FREEDOM AND JUSTICE. Thank you for your love and patience.”

The Freedom and Justice movie ignites the political intents in a nation’s governance. That notwithstanding won the hearts of many Ghanaians as seasoned industry players or actors were featured. 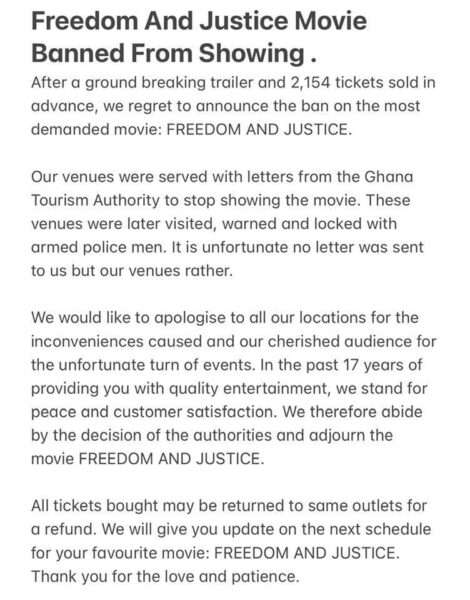 I still board ‘trotro’, stay in my dad’s house despite being popular in the 90s – Veteran Actress