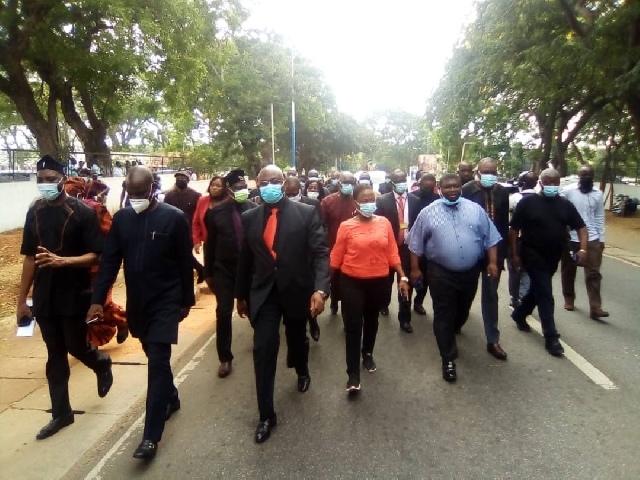 The Minority caucus in Parliament has demanded open collation of the Techiman South parliamentary results at the constituency level.

The minority made the demands after it stormed the EC headquarters on Tuesday.

According to the Minority leader Haruna Iddrisu, it is shocking that the media and civil society groups appear disinterested in their request for public collation of the results in Techiman South when a similar thing was done in Banda in the same area.

“In Techiman South civil society and the media have argued that the NDC should go to court; my response is go to court with what and for what? because we do not even have declared results. It is only in Nana Akufo-Addo’s government that a candidate will contest an election and results are declared in his absence, results are certified in his absence. And results even as so declared, give us a copy we are in denial for two weeks since the election.

“We demanding justice, when you say go to court I must have something to walk and I must have the results to work with to court, this is the greatest threat to the sustenance of our multiparty democracy. All we are asking for is respect for the electoral laws of Ghana,” Haruna Iddrisu told the media during a protest march at the electoral commission.

Meanwhile, the Electoral Commission has announced it will break for the Christmas festivities on Wednesday, December 23, 2020.