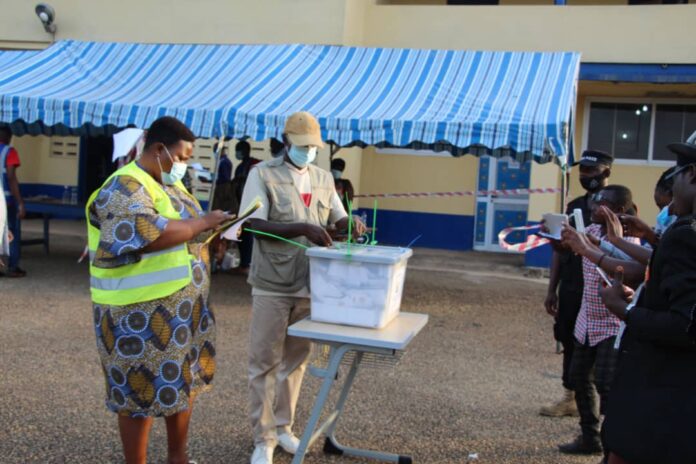 A total of 145 voters did not show up in the Special Voting exercise which ended at 5:00 pm Tuesday in the New Juaben South Constituency of the Eastern Region.

Out of the total registered voters of 837, some 692 voted at the Police Canteen Polling station “A” and “B”.

These were made up of 454 males and 238 females. The absentee voters cannot vote on December 7, according to the EC.

About 40 voters, however, could not find their names in the register hence could not vote.

EC blamed the situation on the failure of the affected persons to transfer their votes.

The New Juaben South Municipal Electoral officer Kofi Asante Owusu said failure by some security personnel to transfer their votes to their designated polling station accounted for the missing names in the ongoing Special voting exercise.

The EC official said the affected persons were supposed to transfer their votes before applying for special voting.

Meanwhile, the acting Public Relations Officer of the Eastern Regional Police Command Francis Gomado said the affected officers will be redeployed closer to polling stations where they registered to enable them exercise their franchise on December 7, 2020.

A total of 7,893 eligible voters were expected to take part in the special voting exercise across 33 constituencies in the Eastern Region.

Voting started at exactly 7:00 am.

At Police Canteen Polling station at the Koforidua Police training school of the New Juaben South Constituency, the first voter arrived at about 4:30 am.

Covid-19 protocols were strictly being adhered to. The queues have been marked for purpose of social distancing while regular hand washing and sanitizing of hands of voters being practiced.

The biometric verification device worked efficiently without any challenge.

The Eastern Regional Minister Eric Kwakye Darfuor who was at the Koforidua Police Training School to observe the process was satisfied with the exercise.

They were satisfied with the process but called for measures to be put in place to ensure that nobody is disenfranchised.

Observers from the European Union were also monitoring the exercise.