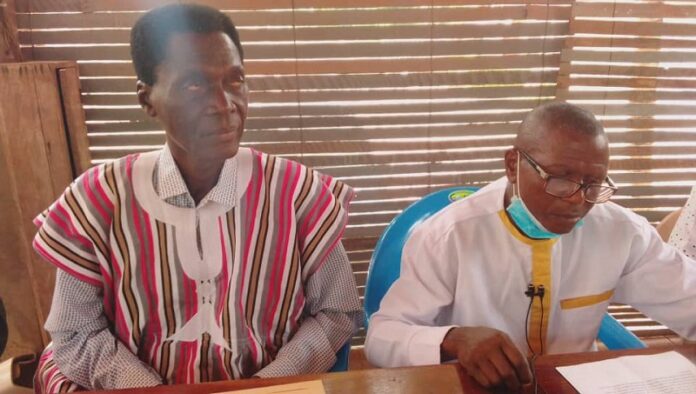 The Association of Kente Weavers in the Volta Region has called on President Akufo-Addo to intervene and ensure the disbursement of MASLOC loans they have applied for since August 2019.

According to the Kente weavers, loan applications for some 425 members which have been approved by Microfinance and Small Loans Center in December, 2019 were diverted by some individuals at the Volta regional office of MASLOC.

At a press conference held in Ho on Wednesday 2nd November 2020, and addressed by the Vice President of the Association, Mr. Paul Franklin Gbortsyo the Kente weavers expressed resentment at how they were treated.

He noted that in August 2019, 175 members of the association applied for the MASLOC loans, while the second batch of 250 members put in their applications in December 2019 but never received the monies though their checks revealed that the applications were approved.

“… while expecting disbursement of the loans before our annual Congress on 13th December, 2019 we invited the CEO, Mr. Stephen Amoah, as one of the dignitaries to the Congress. Though he could not make it himself, he sent a delegation from the Accra head office and the Ho office led by Mr. George Osei-Waree to act on his behalf. In his address, the Volta regional director, Mr. Daniel Wudome confirmed that the loan application of the first 175 members of the association has been processed and awaiting disbursement. In January 2020 we met with the Regional Director at Ho where he mentioned that our loan application has been approved hence, they were only waiting for the cheques,” Mr. Gbortsyo revealed.

He stated further that in June this year, they found out that their monies were paid but never got to the applicants.

He said, “During one of the subsequent follow-ups to the MASLOC outfits, we were made to understand that part of our loan applications could not be found hence we should bring the list of all those who applied to enable them to solve the problem, which we complied.

In June 2020, after another follow up, we learnt that the Volta regional director had been sacked for misappropriation of funds. Further investigation revealed that the director had connived with some staff members at the MASLOC head office and used our approved loan applications to collect checks as if they were collected by us leading to his dismissal,” he added.

The association said, “We felt cheated when we heard of the negative development, more especially when we heard that some associations in the Ashanti region had the loan for three good times. We are therefore using this medium to appeal to the President, Nana Akufo-Addo for his intervention. It would be recalled that we wrote two letters; one in July and another in October, 2020 to the President without any response.”