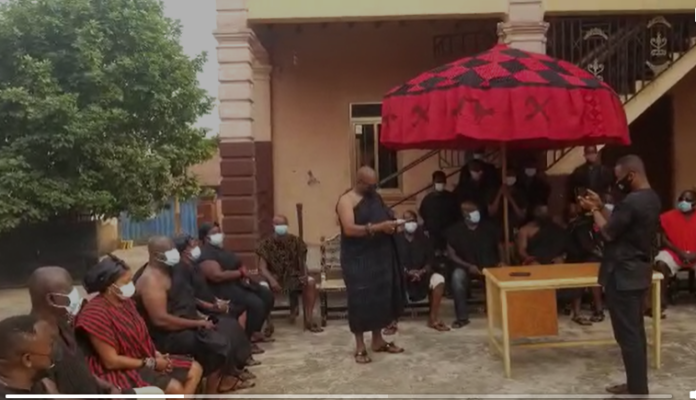 The Asamankese Traditional Council has called on President Akufo Addo not to re-nominate the Municipal Chief Executive, MCE for West Akyem, Seth Oduro Boadu over his gross incompetence and disrespect to Chiefs and Elders in the Municipality.

The chiefs allege that the arrogance of the MCE comes with his favorite mantra “I represent the President, therefore, reports to the President ” to mean he is not answerable to any Chief.

The traditional Council took the decision during an extraordinary emergency meeting held at Tankamfo Fie, the Chief palace of Asamankesehene Osabarima Adu Darko III on January 23, 2021.

The Traditional Council accused the MCE of “total disregard for them, and have run out of patience: We have had enough of his insubordination and we do not have anything to do with him ”

According to the Traditional Council explained that inasmuch as it wouldn’t want to meddle in partisan Politics and interfere with appointment authority of the executive arm of government, they believe it will be in the interest of the government and that of the Municipality to nominate a new person to become MCE for the area.

The Chiefs said the MCE’s tendencies of running rough shots among heads of departments and stakeholders affected development in the area during his four-year tenure.

They cited that, the incompetence of the MCE has resulted in a stalemate on the allocation of stores and stalls constructed by the Assembly, however, blocked the Nananom from intervening to resolve the impasse.