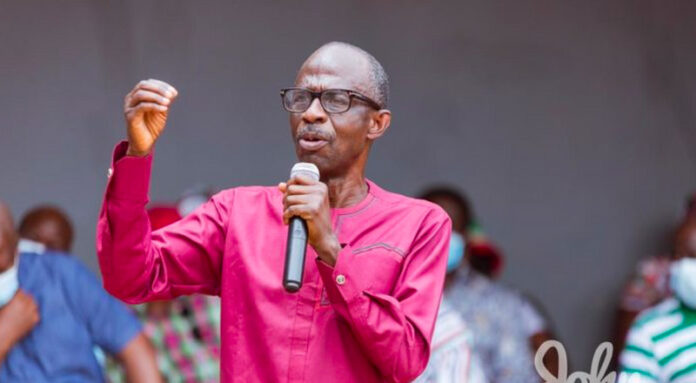 General Secretary of the opposition NDC party, Johnson Asiedu Nketia says the party’s Member of Parliament for Asawase, Mohammed Mubarak Muntaka must be celebrated for protecting democracy during the chaotic election of a Speaker for Ghana’s 8th  Parliament.

A section of the public has chided Hon. Muntaka for what they’ve described as his dishonorable and lawless actions on the dawn of January 7.

The Lawmaker was seen kicking the voting booths and removing the ballot box from its original position during the voting process as he was advocating for his colleague MPs-elect to go strictly by the Standing Orders of Parliament which required them to cast their votes secretly.

According to Hon. Muntaka, he needed to insist that the law was obeyed as MPs-elect, though voting secretly, were made to select the candidates in a manner that he(Muntaka) could see whichever candidate each of the NDC MPs-elect voted for, for the position of Speaker.

Muntaka served as a polling agent for his party during the election of Speaker and when MP for Tema West, Carlos Ahenkorah, snatched the ballot papers and bolted with them sensing defeat to the NPP’s candidate. Muntaka then chased Ahenkorah and gave him several slaps and punches.

He succeeded in retrieving the ballot papers with the help of the Marshall Department though two of the papers had allegedly been chewed by Ahenkorah.

Commenting on Muntaka’s conduct in an interview with Accra FM monitored by Kasapafmonline.com, Mr Asiedu Nketia commended him for his courageous action in defending Ghana’s constitution, adding that persons like Muntaka must be celebrated as a hero.

“We (NDC party) celebrate Muntaka because he stood for the Constitution of the Republic of Ghana, he stood for democracy by preventing wrongdoing in the Chamber of Parliament. Such people, we celebrate them…we honor them. I hear people saying polling booths were kicked and ballot boxes were taken but they are legitimate actions that were intended to prevent wrongdoing. I don’t condemn such action, I rather praise them and even if I had an opportunity I will ensure they are awarded a prize. Any other person who will do as Muntaka did if there’s ‘democracy price’ it must be awarded to the person.”

Apologize or prove your bribe allegations – GBA to Muntaka