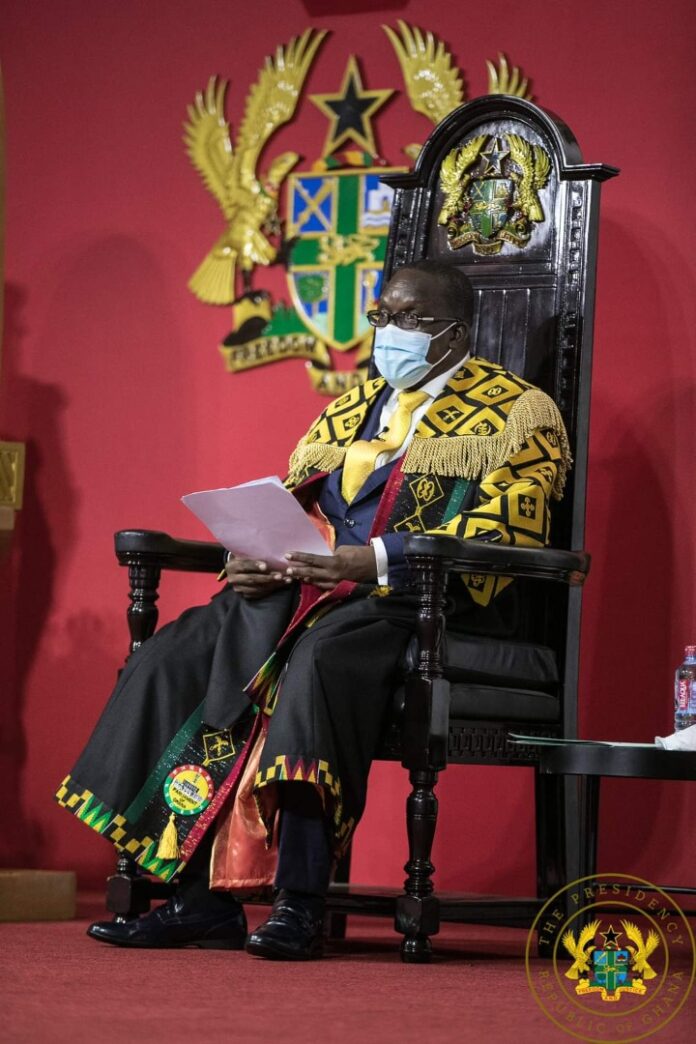 He had completely packed out from the Job 600 office allocated to him to operate from as the Second Deputy Speaker of Ghana’s 7th Parliament and the National Democratic Congress’ (NDC) Member of Parliament for Nadowli-Kaleo constituency had said goodbye to the legislative house, having served his constituents and Ghana for 28 years. That is an enviable record.

At the age of 35 years, Hon. Alban Sumana Kingsford Bagbin entered Parliament and gradually rose through the ranks to become both Minority Leader and Majority Leader as well as Leader of Government Business.

To him, January 6, 2020, was the opportune time to call it quits having diligently served his country since the birth of the 4th Republican constitution. Hon Bagbin did not contest the NDC’s parliamentary primary for the Nadowli-Kaleo constituency. Therefore, exiting the legislative house was imminent.

For those who know the invaluable wealth of knowledge that Hon. Bagbin had garnered, earning him the nickname ‘Father’, became sad as he bid good-bye to the legislative house. To others, although Hon. Bagbin’s departure from the legislature would present a political opportunity to the up and coming youth to also start their parliamentary career. But what they were not prepared for was whether his leaving parliament at this particular time was good or not.

Hon. Bagbin is an institution when it comes to our parliamentary practice.

As a result, Parliament was going to miss his vast knowledge of parliamentary practices and procedures.

However, little did he know that while preparing his exit from the legislature, God was also preparing to give him four more years, at least for now, by crowning his illustrious legislative career with the position of Speaker, the third most important gentleman of the land, after the President and his Vice.

In 2018, I, together with Edzorna Mensah and Simon Agianab got the opportunity to serve Hon. Bagbin. As members of the Parliamentary Press Corps (PPC), Hon. Bagbin humbly called us and pleaded that we become members of his campaign team, when he was contesting the flag bearer position of the NDC.

I did not even give such a request a second thought and straight away, I granted his request, knowing how supportive he has been to the Parliamentary Press Corps (PPC).
As a journalist, my role was clearly defined in the team – a communication member of Team Bagbin. I was also assigned additional responsibilities to serve in the advance team of the campaign. I arrogated to myself the position of ‘Director of Operations’ among the advance team, while taking instructions from the Head of Security of Team Bagbin, Charles.

When it comes to the Communications Team, I took direct instructions from Hon. Bagbin himself. That was how close I got to know Hon. Bagbin.

He is very accessible 24/7 and his humility without any shred of doubt, is worth emulating.
He will never interfere in your work. However, he will, as a lawyer and father, give you good counsel to always put Ghana first in all the things you do and insist that you don’t jeopardize the peace that the country is enjoying in your write-ups.

In all the places we went to, the party delegates will secretly tell me that Hon Bagbin is a great leader and are praying that he becomes the next Speaker of Ghana’s Parliament even though our mission was to solicit their support for the flag bearer position of the NDC.

It was here that I got to know that Hon. Bagbin had worked very hard to win the hearts of the grassroot supporters of the NDC and should the party win the 2020 general elections, any attempt to deny him the Speaker position will be fiercely resisted by all.

I must also stress that not only does Hon. Bagbin command respect among the NDC grassroots, but also, among supporters of the New Patriotic Party (NPP) and other political parties in the country. He is loved by all.

When the results of the 2020 Parliamentary Elections were announced and there was a tie, 137:137 for both NPP and NDC, with one Independent candidate, that was when I told myself that it is possible for Hon. Bagbin to become the next Speaker of Ghana’s Parliament.

It, therefore, came to me as no surprise when the NDC MPs nominated Hon. Bagbin to be elected as the Speaker of the 8th Parliament of Ghana.

When the NPP on their part proposed Prof. Aaron Michael Oquaye to the position of Speaker of the 8th Parliament, I knew it was the hour of restoration.

The current configuration of Ghana’s Parliament obviously needs a consensus builder in the driver’s seat.

It cannot be lost on any keen observer of the 7th Parliament the simmering tension that had characterised it’s life span, with Prof. Aaron Michael Oquaye presiding as Speaker.
On countless occasions the Speaker had clashed with the Minority NDC MPs and had also had skirmishes with the Majority NPP MPs.

The tense situation was worrying. In fact, most of the MPs had confessed that they were comfortable when the First Deputy Speaker of Parliament and MP for Bekwai, Hon. Joseph Osei Owusu, took the chair and presided over sittings of the House.

The story was the same with Hon. Bagbin who was then the Second Deputy Speaker of the House.

Therefore, when Hon. Bagbin’s name came up against Prof. Aaron Michael Oquaye, everybody who is familiar with the conduct of the two (Prof. Michael Oquaye and Hon. Bagbin) whenever they are presiding over sittings of the legislative house, knew who was going to emerge victorious.

With two names having been proposed for the position of Speaker, the Standing Orders of the House, Order 9(1) and Article 104(4) of the 1992 Constitution spelt out the conduct and procedure that should be used.

For emphasis, Order 9(1) of the Standing Orders of the House, which spirit was derived from Article 104(4) of the 1992 constitution states that “Where more than one person is proposed, a motion shall be made and seconded in respect of each person, and the House shall proceed to elect a Speaker by secret ballot in accordance with the provisions of this Order”.

Both NPP and NDC as political parties had a strategy in place in order to whip their members in line to vote for their respective candidates. A three-whip system was invoked.
The NPP’s strategy was for their MPs-elect to show their ballot to their Chief Whip, a strategy that clearly contravenes the rule of secret voting as set out in the Standing Orders of the House. This was for the NPP Whip to know that his members really voted for the party’s proposed candidate – Prof. Aaron Michael Oquaye.

On the part of the NDC, their strategy was to impress on the Clerk of Parliament, Cyril Nsiah, who presided over the election of Speaker of Parliament as Chairman of the occasion, to insist on secret voting, knowing that it is the only way to ensure victory for their proposed candidate, Hon. Bagbin.

The NDC knew some of the NPP MPs-elect were against the candidature of Prof. Michael Oquaye’s second bid for the position of Speaker and the only way to ensure victory for Hon. Bagbin was to insist on the secret ballot.

Hon. Bagbin is loved by all and no wonder he has earned the name “FATHER”. He is indeed a father to all and sundry.

When the time came for Members to vote, the NDC MPs, led by their Chief Whip, Hon. Mohammed Mubarak Muntaka, did all he could, including disrupting the voting process to ensure a re-start whenever any NPP MP-elect showed his or her ballot to their Chief Whip, Frank Annor Dompreh.

It got to a time that the NPP had no choice than to comply with the dictates of Order 9(1) of the Standing Orders of the House, as the scheduled time for the inauguration of the President-elect, Nana Addo Dankwa Akufo-Addo, was fast approaching.

At the end of voting, Prof. Michael Oquaye polled 136 votes with one spoilt ballot. Just when the Clerks at the Table were in the process of counting the ballots of Hon. Bagbin, the MP-elect for Tema West, Carlos Ahenkorah, emerged from nowhere to snatch some of the ballots and run away, knowing very well that his side had lost the contest.

He was given a hot chase by some NDC MPs-elect, including Hon. Muntaka as well as some members from the Office of the Marshall of Parliament.
Mr. Ahenkorah’s motive was to ensure that the election was cancelled and a fresh one conducted, but he did not succeed.

The leadership of both NPP and NDC as well as the Clerk of Parliament went into conclave and came back to declare Hon. Alban Sumana Kingsford Bagbin as the Speaker-elect for the 8th Parliament of the 4th Republic of Ghana.

Wearing a blue jacket and a white shirt with a gold tie to match, it was obvious that Hon. Bagbin had prepared himself well for the victory at hand. He was sworn in by the Chief Justice of the land, Justice Anin Yeboah.

When he took his chair to preside over the House, his first comment was to call for order in the chamber – “Order, Order”, he called, while hitting the gavel on his desk to signify his ‘arrival’ as the Speaker of the 8th Parliament of the House. It was a moment of joy for all.
A new era has arrived with the consensus builder and father for all, Hon. Bagbin, taking his rightful position to crown his illustrious Parliamentary career.

Not even attempts by Carlos Ahenkorah to subvert the will of the MPs could stop Hon. Bagbin from ascending to the position of Speaker of the 8th Parliament of the 4th Republic.

It was under his watch as the Majority Leader and Leader of Government Business that he instituted a clothing allowance for personnel of the Ghana Police Service on secondment to Parliament.

This laudable initiative helped to cushion the men and women in black, who had been deployed to Parliament. Unfortunately, this initiative has since been cancelled.

With Hon. Bagbin occupying the position of Speaker, the 8th Parliament promises to be interesting.

In his acceptance speech, Hon. Bagbin promised to put at the disposal of Parliament and the country, the stock of knowledge, immense experience and the huge data bank “I have accumulated and accommodated over my 28 years that I have been a Member of this House”.

He also promised to submit himself to the will of the House and further pledged to serve all and sundry to the best of his ability.

Additionally, he promised to consensually discharge his duties as the Speaker of the 8th Parliament of the 4th Republic of Ghana. Interesting times ahead!

The author of this article, Stephen Odoi-Larbi, is the Managing Editor of www.politicoghana.com, and an Executive Member of the Parliamentary Press Corps (PPC).