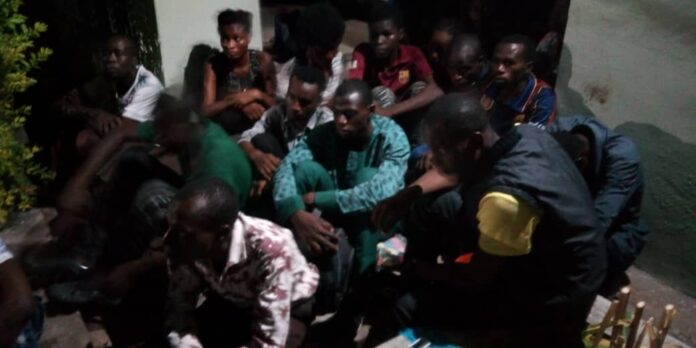 The Police in Koforidua, the Eastern Regional Capital, have arrested some foreign nationals suspected to be human traffickers.

About 20 victims including three young women detained in a house were also rescued during the operation Saturday, January 9, 2020.

The suspects and the victims numbering about 23 are in the custody of the Koforidua Central Police station.

Kasapa News has gathered that the suspects rented the apartment at Trom, a suburb of New Juaben South Municipality, and through the internet recruited their victims mostly from Burkina Faso under the guise of securing them a well-paid job in Ghana.

Upon arrival of their victims, they detain and extort monies from them, seize their traveling documents and mobile phones.

One of the male victims, however, managed to escape few days ago, and after joining the Muslim prayers at Koforidua Zongo narrated his ordeal to the Muslim leadership through a French interpreter.

According to a resident, Wahab Amadu, the Police were informed and with support from the youth from Koforidua Zongo located the house around 7:00 pm, applied minimum force to break into the rooms, arrested the suspects, and rescued their victims.

Dozens of mobile phones, Burkinabe Military uniform, documents, ID cards, laptops, cameras among others were retrieved from the suspects.