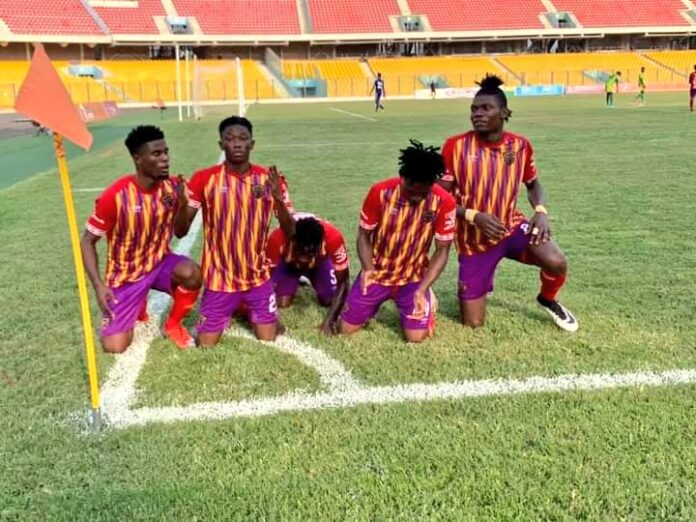 Accra Hearts of Oak on Saturday, needed a Victor Aidoo brace and a goal each from Abdul Manaf, Abdul Lawali, Ansah Botchwey and Benjamin Afutu to beat Bechem United 6-1 at the Accra Sports stadium in their match day seven fixture, handing the League leaders their heaviest defeat of the season.

Bechem United had gone six games without defeat and were tipped to give the Phobians a torrid time but it turned out otherwise as Hearts dominated play and walked away with a comfortable win.

The League leaders had a man down in the 38th minute of the game as Emmanuel Asante got sent off after a second yellow card.

The win also gives Hearts of Oak back-to-back league wins for the first time this season. Daniel Afriyie missed a glorious opportunity in the 32nd minute to break the deadlock but he failed to put the ball at the back of the net after a fine team effort.

Abdul Lawali hit a sweet drive from 15 yards but went straight into the hands of Bechem United goalkeeper Prince Asempa.

Coach Kosta Papic’s side were rewarded in the 52nd minute as Abdul Manaf Umar swept home a sweet ball to break the deadlock.

Former Samatex striker Victor Aidoo climbed off the bench to increase the lead for the Phobians in the 60th minute with a deft finish.

Aidoo got his brace in the 73rd minute to make it 3-0 for Hearts of Oak.

Hearts of Oak were awarded a penalty in the 84th minute as Daniel Afriyie was brought down by Bechem United goalkeeper Prince Asempa.

Frederick Ansah Botchway was up to the task and scored from the spot to give Hearts a 4-0 lead.

Prince Adu Kwabena pulled one back for Bechem United with a nice chip as the Hearts defence lost focus getting to the end of the game.

Abdul Lawali made it 5-1 for the Phobians after connecting beautifully from close range. With the game almost heading to a close, Benjamin Afutu Kotey scored to make it six, result that gives the Phobians their biggest win in the ongoing campaign.