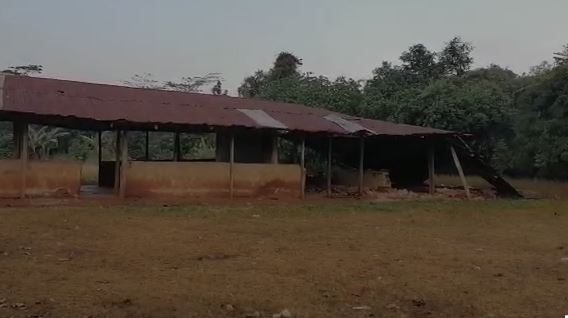 Information gathered by Agoo News indicates that pupils in Boadukrom, a suburb of Nkawkaw in the Kwahu West Municipal Assembly of Eastern Region cannot go to school on 15th January over the poor state of their classroom block.

The Primary School Building is in a poor state, however, class 5 and 6 rooms have collapsed.

The number of classrooms is supposed to be Six (6) but the building has five (5) classrooms and for that matter, class 2 and 3 pupils share one room.

Some children who spoke to Agoo Fm News Ebenezer Kojo Nyavor revealed the poor state of the building affects their day and day activities adding they cannot go to school when school reopens on 15th January.

They appealed to the government to as a matter of urgency come to their aid by constructing a new school building.

A class3 student who wishes to be a Lawyer said “whenever it’s raining or when there is a sign that there is a possible rainfall, School must be closed to prevent any disaster. I want to become a lawyer in the future so I am pleading with Nana Akufo Addo to rescue us. I know Lawyer Joyce Opoku Boateng so I want her to deliver our message to the president that we need a new school building”.

Parents who expressed worry over the state of the school said the building was constructed by the community, but successive governments have failed to construct a new one.

The Parents said they cannot allow their children to use the school building when school reopens.

In addition, the community has not yet benefitted from the national grid; residents threatened to boycott any political activities if the government fails to provide them electricity.

Assemblyman for the area Samuel Boateng commenting on the matter said, the school building is on the Assembly’s projects list which is expected to be constructed in due time.