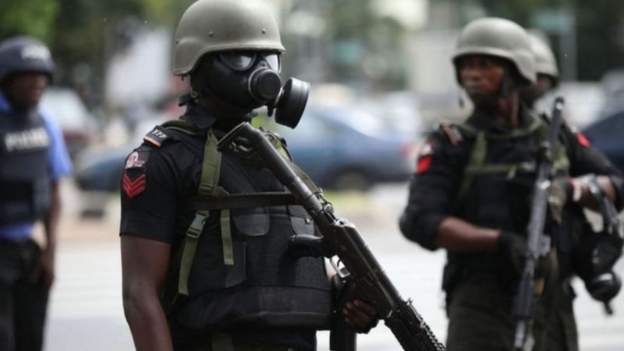 The Nigerian police say four officers were killed and one is still missing after they clashed with an armed criminal gang in the Birnin-Gwari area of Kaduna state.

Police Spokesperson Frank Mba in a statement on Sunday said the officers were ambushed by about 100 “bandits” as they returned from an operation in neighbouring Niger state.

The police say “tens” of gunmen were also killed in the clashes on Friday.

The police statement denies initial reports that 18 officers were abducted during the attack.

It says “only 16” officers were involved in the incident and that the bodies of four of them and their weapons had been recovered, 11 survived while “efforts are being intensified to rescue the officer still missing”.

It’s not clear whether the missing officer had been abducted by the armed men.

Meanwhile, in other separate attacks on Sunday also in Kaduna state, the authorities confirmed at least five people including an 80-year-old woman and a local traditional ruler were killed and several others wounded.

It’s not clear who carried out the series of weekend attacks in Kaduna state.

But it is one of several states in north-western Nigeria where criminal gangs frequently carry out deadly assaults or kidnap people for ransom.

In a previous attack within the week at least 18 people including mothers and their babies were kidnapped in a village in Birnin-Gwari area of the state. They’re yet to be released.