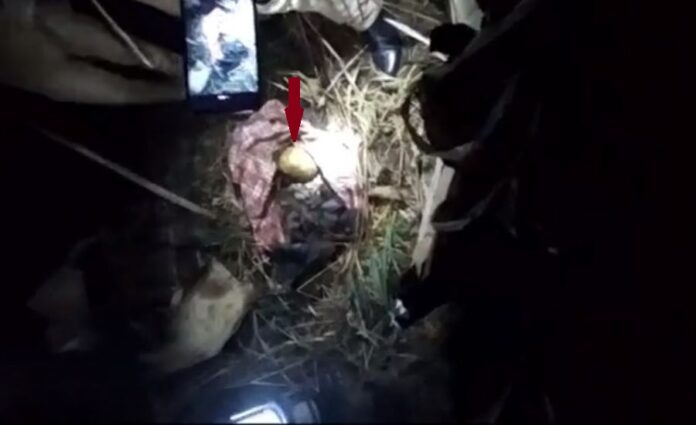 A Pastor named Gideon Boakye of the Heaven’s Kingdom Ministries International, at Mile 2, on the Mallam-Kasoa Highway has been arrested by the Nkroranza Police in the Bono East Region for murdering his daughter and dumping her body at the cemetery.

The suspect had been staying with her nine-year-old daughter in Accra after he went for her from her mother who resides in Nkoranza during the lockdown with the promise to return her when school reopens.

Information gathered indicates that quite recently, the Pastor told the ex-wife’s (girl’s mother) family that the little girl had confessed to being a witch and has used her witchcraft to destroy her uncle’s marriage.

Subsequently, the suspect failed to pick the numerous calls placed to him by her divorced wife’s family.

Recently, the Pastor placed a call to his ex-wife’s family that he was coming over to Nkoranza with his daughter. But while in the town he refused to let the little girl see her mother even though she made the request.

Just last week, he placed a call to ask the ex-wife’s family if the little girl had come to them, saying he woke up around 4am and she was nowhere to be found.

He claimed he had a program back in Accra and so he couldn’t search for the girl and left the town.

The girl’s grandfather then caused an announcement to be made on a radio station at Nkoranza asking the public to help look for the missing girl.

The pastor was then invited by the police to come to Nkoranza and help with investigations. Upon interrogations, he was arrested and was later bailed.

Someone later informed the girl’s family that, he knows someone who stays in the house where the pastor stays in Nkoranza whenever he comes from Accra who could possibly volunteer information.

The person was then contacted who told them that the last time he heard of the girl was on Monday night when her father was mercilessly beat her. He said he tried to rescue the girl but the suspect didn’t open the door.

The man said as the beatings continued he suddenly heard a low sound as though someone had been hit with an object, thereafter, the girl who was yelling went silent which led him to conclude that the suspect might have killed the innocent girl or she’d become unconscious.

An Uncle of the deceased, Samuel Nyamfo told Kasapa News that armed with this information, they informed the police who invited the suspect from Accra.

Upon rigorous interrogation, the pastor confessed to killing his daughter adding that, that very night he put her body in a big bag and dumped her at the Nkoranza South cemetery.

The Police then proceeded to the cemetery with the suspect where the girl’s decomposing body was found in the bag.

The suspect is in police custody and will be arraigned before the court on Monday.