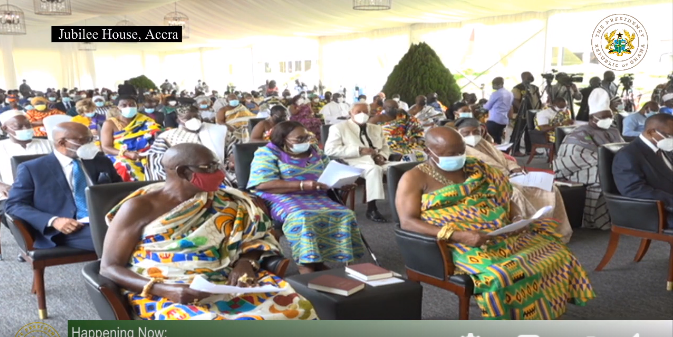 President Nana Addo Dankwa Akufo-Addo has sworn into office members of the Council of State at the Jubilee House.

President Akufo-Addo in an address charged them to give off their best in the discharge of their duties.

“I’m hopeful that all of you on the new Council will live up to expectation and perform effectively in this all important council.”

The Council comprises 11 persons nominated by the president and the elected regional representatives.

The other members are a former Chief Justice of Ghana, a former Chief of the Defence Staff, a former Inspector General of Police and the President of the National House of Chiefs.

They include former Chief Justice Georgina Theodora Wood, Lt. Gen. J.B. Danquah, a former Chief of Defence Staff of the Armed Forces, and Nana Owusu Nsiah, a former Inspector General of Police, to the Council.

The President of the National House of Chiefs, Ogyeahohoo Yaw Gyebi II, is an ex-officio member of the Council, in furtherance of Article 89(2)(b).