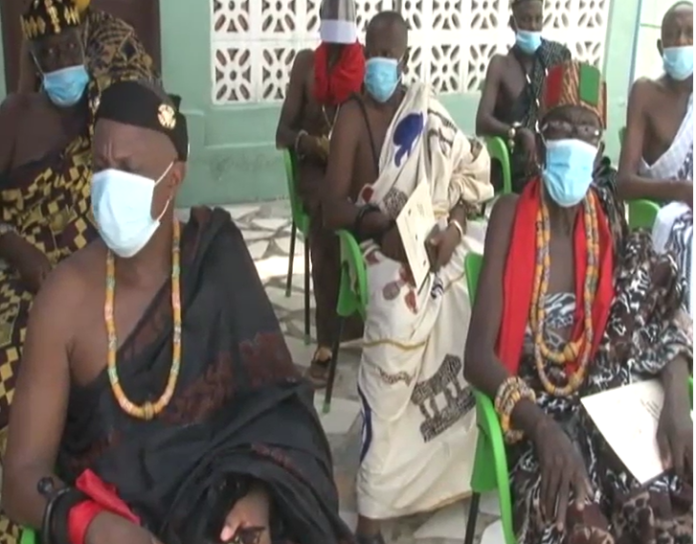 Some five aggrieved Paramount Chiefs and stool fathers of the Ave Council of Chiefs in the Akatsi-North District of the Volta region have served notice of their unwillingness to work with current DCE, Dr. Prince Sodoke Amuzu should he be appointed again by President Akufo-Addo.

The Chiefs at a Press engagement on Friday held at Ave-Dzalele described the outgoing DCE as “a disrespectful being” who has consistently undermined them.

They alleged that the DCE on countless times refused to respond to their invitation on issues bordering on the development of the area.

Ave has six paramount chiefs who form the nucleus of the Ave Council of Chiefs.

The Council which has been in existence since March 2004 is seen as the mouthpiece on all matters and activities relating to chieftaincy.

In recent times, however, the Council has become divided over issues -most especially on matters relating to politics and the development of the area.

Addressing the media, Secretary to the Council, Mr. Mac-Solo Dziwornu Ziddah accused President of the Council, Torgbui Nyamekor Glakpe V, of attempting to make the Ave Council of Chiefs a political wing by issuing statements to push the political agenda of his son Prince Sodoke Amuzu who has served as a DCE since 2017.

The statements according to the five aggrieved Chiefs include a recent statement purportedly emanating from the President of the Council, Torgbui Myakekor Glakpe V seeking to endorse the re-nomination of Dr. Archibald Yao Letsa and John Peter Amewu as Ministers by President Akufo-Addo, a statement they described as non-representative.

The aggrieved traditional rulers also accused the DCE of disrespecting them having failed to honour invitations intended to address the issues.

They served notice that, they will not work with the DCE, Dr. Prince Sodoke Amuzu if he is re-nominated again.

But in response, the DCE noted that he is shocked with the new developments indicating that he has always worked with the traditional authorities without any issues.

Nonetheless, he indicated that processes have been initiated to resolve the issues.

Prosecute Ajumako Enyan Essiam DCE, others who assaulted me – Policeman