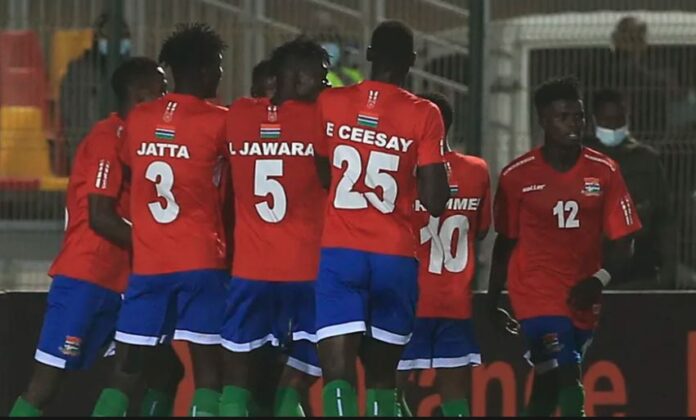 The Young Scorpions of the Gambia came from behind to beat Ghana 2-1 and qualify to the quarter-finals of the Total Africa U-20 Cup of Nations, Mauritania 2021.

Abdul Fatawu’s curler just outside the area gave the Black Satellites the lead inside the first eight minutes before the Young Scorpions came back to with goals from Kajally Drammeh and Lamarana Jallow to win the West Africa derby at the Stade Municipal de Nouadhibou.

The victory sends the Gambia to the knockout stage for the first time in 14 years when they finished third at the 2007 edition in Congo Brazzaville; they will face the Central African Republic in the quarter-finals. The Black Satellites also qualified for the last eight to face Cameroon in Nouakchott.

The Gambia came into Monday’s match knowing they needed to beat the Ghanaians to qualify after the results in Group B.

The highly charged match lived up to its billing as the two sides showed purpose and zeal to go for the points in Nouadhibou.

Fatawu broke the deadlock with a stunning curler after 8 minutes to give the Black Satellites the lead, the Steadfast FC attacking midfielder beat two defenders before firing into the top corner.

The Scorpions responded with a close range header from Kajally Drammeh, the diminutive winger headed in Ebou Camara’s cross past the keeper to level the score after 15 minutes.

The Gambia scored the second after the half hour mark, Lamarana Jallow hammered in a free kick past the keeper to give the Young Scorpions the lead.

Lamin Saidy pulled a brilliant save to deny Ghana’s Boah with strong block, the keeper used his legs to keep out the strikers low drive after he was played in by Fatawu.

The second saw the two sides cancel each other before the Gambia were reduced to ten men after Ebou Camara was sent off for a second booking late on.

The Gambia will now take on debutants Central African Republic in the quarter finals in Nouakchott whiles Ghana will face Cameroon in the last eight.

We’re so excited to make the last eight of the competition. We worked really hard to win the match against Ghana. I told my family and friends back home before the match that I was going to be the man of the match. We will now go back and prepare for the quarter final against Central African Republic in Nouakchott and try to make the semis.

It’s an honour to come up against Ghana’s coach (Zito). This is a team that won the FIFA U-20 World Cup in 2009. My players had to give their best as there was no choice but to win this match. We had to raise our game and do the work that we did on the training ground to come up and better a huge opponent like Ghana.

Everyone wants to beat Ghana. I won’t take anything from Gambia they did very well, we came all out to win they also came out to win and at the end of the day those who took their chances won. Congratulations to Gambia coach, but what mattered was to qualify and that was the most important thing. I wanted to top the group, but I couldn’t.