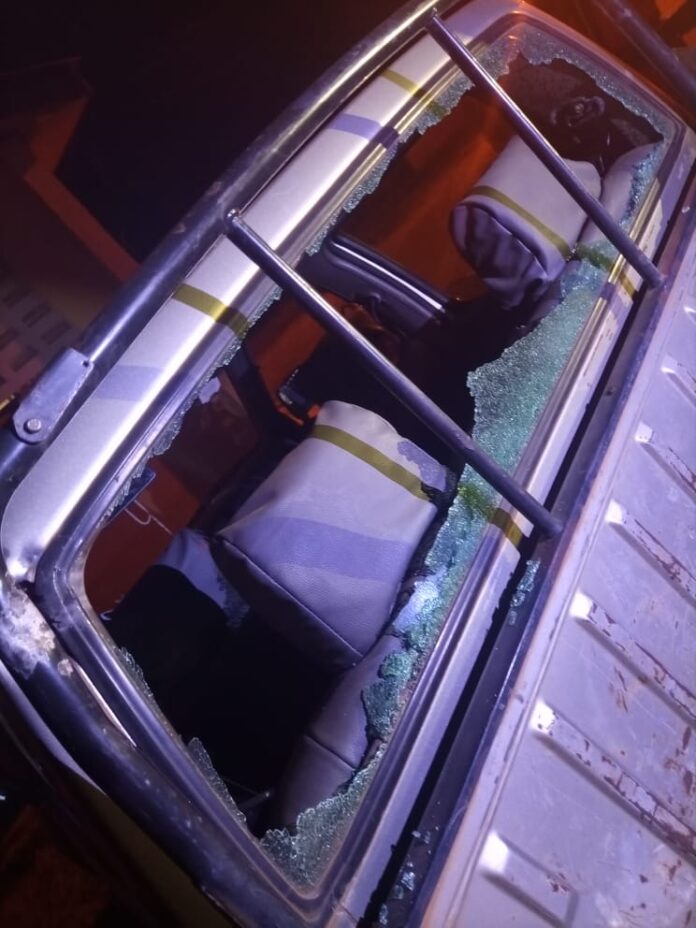 The robbers mounted roadblocks on Asuom to Kade road and shot at two vehicles including driven by a Priest of Catholic Church.

Information gathered indicate that a drive Abubakari Sule, 37 reported to Police that on a fateful day that about 7:00 pm, whiles he was in charge of unregistered Honda CRV onboard by six persons from Asuom going to Kade suddenly noticed that the road has been blocked with firewood forcing her to reduce his speed. Shortly, eight(8) armed robbers wearing mask and some of them holding guns emerged from the bush and fired at his car.

The bullets caused damage to the windscreen, rear glass of the driver side was also smashed and front tyre also deflated.

“According to Abubakari Sule who was on a Honda CRV with the driver’s side tyre deflated and the main windscreen smashed, he was going to Abaam and just about five kilometres from Asuom they met a group of armed robbers numbering about eight with two of them holding pump-action guns who shot at them causing damage to their vehicle windscreen and deflated the tyres” Police said.

Later a Catholic Priest Rev./Fr. Emmanuel Angmor who was driving a Nissan Pick up with registration number GN 8091-14, about 7:25 pm he was returning from Abaam to Asuom township and met armed robbers numbering about six with two of them holding pump action guns.

He narrated to Police that, the robbers shot at the passenger side door and the back windscreen as well as the front tyre of the drivers side causing damage to them all.

The Police Patrol team went and combed the area and found three spent and three unused BBB Cartridges but none of the robbers. No arrest was made.

The Acting Public Relations Officer of the Eastern Regional Police Command, Sergeant Francis Gomado confirmed incident to Kasapa News stating that efforts are underway to arrest the suspects. He appealed to residents in the area to help provide police vital information that will facilitate the arrest of the notorious robbery gang.