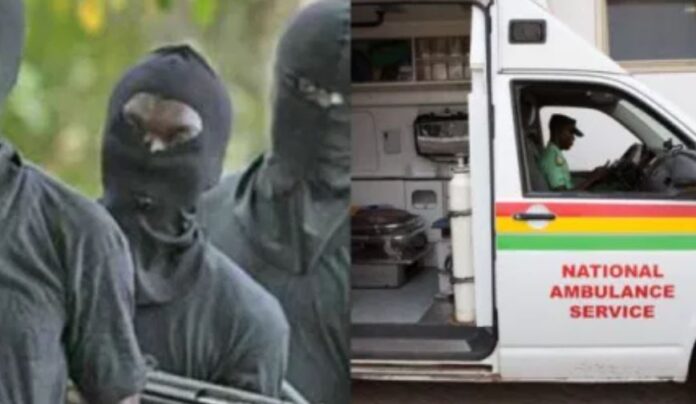 The Chief Executive Officer of the National Ambulance Service, Prof. Ahmed Zakaria has revealed that the armed robbers who shot to death an ambulance driver did not only rob a pregnant woman in labour, but also sexually assaulted a female paramedic who was onboard the vehicle.

Abraham Tetteh Homeku was attacked and shot more than six times by the armed robbers on Thursday dawn while he was transporting a pregnant woman from the Akuse Government Hospital to the Eastern Regional Hospital in Koforidua.

He was rushed to the Korle Bu Teaching Hospital where he died on Saturday.

In an interview with Joy News, Prof. Ahmed Zakaria stated that the incident has adversely affected the work of the Ambulance Service with morale at an all-time low.

According to him, people initially were trying to rationalize that the robbers might have mistaken the ambulance to be a police car due to the blurring siren, however, the robbers’ actions after realizing the vehicle was an ambulance shows how callous they are.

“...For the armed robbers to get close identify it as an ambulance, shot the driver and still shoot the vehicle, force the patient compartment open, see a patient lying on a stretcher being attended to by a paramedic and still go ahead to rob them and manhandle them is something that we are yet to come to terms with. We never would have believed that such a thing will happen.”

“After everything, they forced the poor lady to go and switch off the engine because they felt that siren and the beacon light was drawing attention. So now, the paramedic and the patient were in the patient compartment and normally it is locked. They had to force open, shot the vehicle, force it open, rob the poor girl of her telephone and whatever was on her, fondle her breast…There were two of them, the driver who’s a male, and a female paramedic who was attending to the patient. As for the driver he was shot in the eye and the head and so he definitely would have lost consciousness and so with the head on the steering wheel with his seat belt still on he could not move at all. So now they had to force the poor girl to leave the patient compartment to go and switch the engine off all this time with a gun pointed at her head, something that is traumatic that will be very difficult for the lady to recover immediately unless with some psychological support,” Prof. Ahmed Zakaria added.