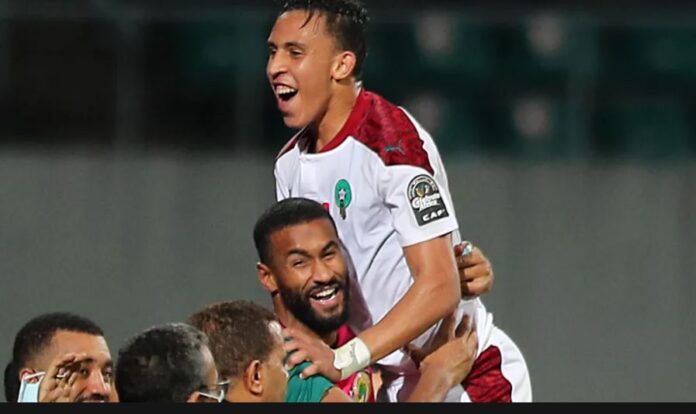 Soufiane Rahimi was the two-goal hero for title holders Morocco who produced one of their best displays of the tournament to beat hosts Cameroon 4-0 on Wednesday to reach the final of the TOTAL Africa Nations Championship (CHAN).

The Atlas Lions kept alive their hopes of retaining the title as they breezed past the Indomitable Lions in the semi-final game at the Limbe Stadium to a line-up a clash with Mali in Sunday’s final in Yaounde.

First half goals by Soufiane Bouftini and Soufiane Rahimi put the North Africans in firm control of the match as they silenced the vociferous home fans.

Rahimi scored his second on the night and his tournament’s fifth before Mohammed Ali Bemammer wrapped up the emphatic victory for the title holders.

Morocco could have won the match by a wider margin but striker Ayoub El Kaabi was unlucky in a one-on-one situation with Cameroon keeper Haschou Kerrido in the first-half but the result was enough to keep the Atlas Lions excited for the final.

The Atlas Lions settled quickly by injecting some urgency into their game in direct contrast to how they slowly warmed into their previous matches since the start of the tournament.

They dominated the opening 20 minutes with their pace that troubled the Indomitable Lions who were left with the only option of defending their goal area in numbers.

A quickly taken free-kick from the left the Cameroon defenders flatfooted, allowing Soufiane Rahimi the space to an inviting looping pass to Ayoub El Kaabi who was alone in the box.

Cameroon goalkeeper Haschou Kerrido produced a fantastic one-hand save on the goal line to prevent El Kaabi’s strike from opening the scoring.

Just before the hour mark disaster struck for the home side as Kerrido made a hash of defender Omar Namsaoui’s well-taken free-kick from the left, allowing Soufiane Bouftini the easy job of just tapping it in for the opener.

Despite silencing the home fans, Morocco continued to dominate the game allowing the Indomitable Lions little access to the ball to create scoring opportunities.

The determination of the Atlas Lions paid off ten minutes later when El Kaabi paid a beautiful pass to Abdelilah Hafidi who tapped from Rahimi to fire in his fourth goal of the tournament.

Cameroon returned from the break determined to make amends for their uninspiring first-half display which caused several anxious moments for the Atlas Lions.

Goalkeeper Anas Zniti needed to be at top form with several aerial saves to deny the Cameroonian by the hour mark as striker Yannick N’djeng and Pierre Etame missed good scoring opportunities.

The Indomitable Lions switched to fast attacking moves on the wings, creating problems particularly for the defenders until they turned the style on again.

A lurking Rahimi was gifted the third goal when he took advantage of a mix-up between two Cameroon defenders to fire past Kerrido in the 74th minute.

The Cameroon goalkeeper Kerrido was undaunted by his fate and produced a world class save to deny Walid El Karti before Bemammer sneaked in from behind to wrap up the emphatic victory for the Atlas Lions.

Morocco will meet Mali in the final at the Ahmadou Ahidjo Stadium in Yaounde on Sunday.

Guinea will play hosts Cameroon in the third-place playoff at the Reunification Stadium in Douala on Saturday.