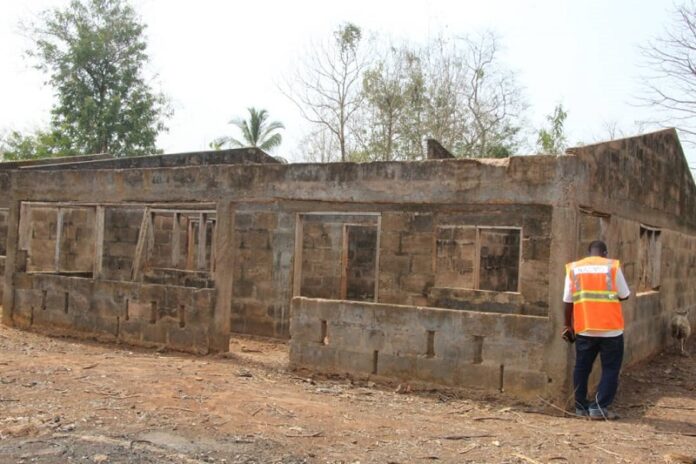 A bungalow Project initiated twenty(20) years ago to house Physician Assistants (P. A) posted to Tease Presbyterian Health Center in the Afram Plains South District of the Eastern region has been abandoned in spite of chronic accommodation challenges facing staff of the facility.

The four-bedroom accommodation project located in the precinct of the facility stalled at the lentil level of construction owing to financial difficulty.

The lack of accommodation coupled with other challenges is discouraging physician Assistants from accepting posting to the Health Center.

Currently, the only Physician Assistant who has accepted posting to the facility is improvising in a rented room quite a distance away from the facility.

Apart from this, inadequate accommodation for Nurses is another worrying challenge facing Nurses posted to the facility.

The Tease Health Centre was commissioned by the late former President Jerry John Rawlings on February 15, 1990.

The Health Center serves as a District Hospital for the entire Afram Plains South District.

OPD attendance is high with malaria and snake bites being common cases the facility attend to.

However many serious medical conditions are referred to Donkorkrom Presbyterian Hospital due to lack of capacity.

Afram Plains South District was among eight (8) Districts in the Eastern Region that was expected to benefit from the 94 new District Hospitals promised by President Akufo Addo in 2020 to be constructed within a year.

However, the site earmarked for the project has overgrown with weeds.

The Krontihene of Pitiku Traditional Council Nana Adu Paako had told Kasapa News in a previous interview that, the absence of a District Hospital is affecting quality healthcare.

He said the Health center does not have the capacity to handle many ailments reported at the facility.