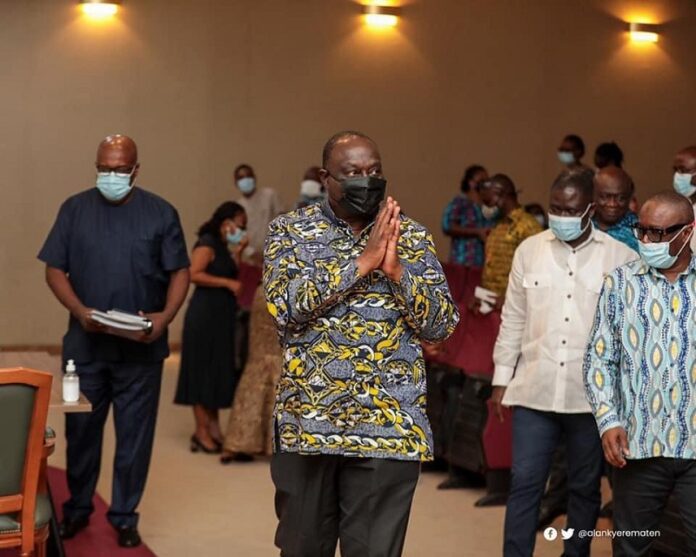 The New Patriotic Party (NPP) has a cherished tradition and a unique history. Our beginning dates back to 1991 of coming together of like-minded persons who were unhappy with the authoritarian regime of the PNDC. As a tradition, we have witnessed the bitter experience of hatred, brutality and victimization at the unmerciful hands of PNDC before the 4th Republic.

At the birth of the country’s 4th Republic in 1992, the NPP was formed under most unfavorable political pressure in the hardest of time. J. J Rawlings and PNDC had virtually collapsed the businesses of financial giants then (including Appenteng Appiah Menkah of apino soap fame, Mr Sarfo Adu, etc). The bold and vociferous who could make case for our tradition were either sent into exile or forced into silence at home. Politically, it was so hard to differentiate between men and women as almost all were calmed into submission.

Going into the 1992 general election with the respectable Prof. Adu Boahen as our brave candidate, NPP needed money as well as fearless men whose commitment and loyalty could pass the Heaven-gate test. Times were unbelievably tough, only the real stars then could rise.

Our difficult beginning and the subsequent progress rested wholly on the broad shoulders of men and women who lighted our candle in the middle of a heavy rain. One group that remained relevant and came to the rescue of the party providing manna during this desert times of the party was the Young Executive Forum (YEF).

In 1992, as a relatively young Lawyer, Economist, Trade Expert, Development Consultant and an Entrepreneur, Alan Kyerematen founded the Young Executive Forum (YEF) a group of young professionals who had the interest of NPP at heart and the wherewithal to fund the party from it’s formation to victory in the year 2000 and beyond. Some of the notable members of YEF who readily register their names on my memory are Hon. Dan Botwe, Hon. Felix Owusu Agyapong, and Ing. Kwabena Agyei Agyepong. Others were Hon. Courage Quashigah and Hon. Baah Wiredu both of blessed, etc. Alan Kyerematen became the first Chairman of YEF in 1992 at the very moment he was also serving as a member of the National Executive Committee (NEC) of NPP.

It is instructive to note that the Young Executive Forum under the chairmanship of Alan Kyerematen largely served as the financial backbone of NPP, especially, from 1992 to the year 2000 when we won power for the first time in about 30 years as a tradition. As a matter of fact, the first-ever National Head Office of NPP situated at Kokomlemle in Accra was acquired with an initial part payment by YEF. The relevance of YEF at the time was not only supporting financially but also contributing a chunk of their diverse human resource to the party. YEF under the leadership of Alan remained the voice of NPP in almost all media and non-media activities.

Truth be told, this is just one of the many contributions by the most tried and tested candidate, Alan John Kwadwo Kyerematen. The immeasurable impact of this singular act of founding YEF tells the kind of leadership and foresight he brought on board.

Alan has seen and touched the roots of NPP, he is sensitive to the direction of our party’s spirit. Truly, truly I say unto you, in a crucial election like that of 2024, unless a man knows the roots of NPP he cannot carry it into victory.

For the benefit of the young and the new, who I cherish by the way, there are men and women who have been or were there from our difficult beginning. They are, without debate, our true definition of loyalty and they remain our perfect benchmark for Commitment to the New Patriotic Party. They were bold in the face of brutality, they showed force when faced with tall and hardened walls of power, they spoke during the culture of silence, their determination was ballooned to swallow the high risk that many would avoid. As members of NPP, we must remember that the NPP we enjoy today was born and brought up by these men such as Alan John Kwadwo Kyerematen. Yenim no fire tete, Alan abr3, adru n’eso. Some of us campaigned against Alan and asked him to wait for his time, THIS IS ALAN’S TIME, patience pays!

We have a tradition. Alan is Next!